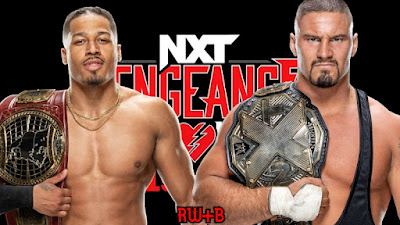 The latest special edition installment of WWE's NXT, labeled as this year's Vengeance Day, was a decent episode though it didn't really hit that next level that I feel these specials used to prior to the 2.0 shift back to developmental.

Pete and Tony D's weapon filled cage match was good for what it was, saw the right man win, and had a decent level of entertainment to offer despite running below ten-minutes. Dunne elevated D'Angelo for sure.

The Women's Tag Team Championship defense was a bit of a below average, rough affair and the weakest thing of the broadcast.

Hayes' defense against Grimes made for a great match and easily the best thing that aired here. The dude has a lot of potential. I wouldn't have minded a title change, because I still fondly remember Trevor Lee's epic reign with the Mid-Atlantic strap, but the right call was made here.

Next, the Creed Brothers took down MSK to win this year's Dusty Classic. They only got ten to work with, but they made it work. The victors are growing nicely. Pretty good stuff that could've admittedly been better with more time.

The main event saw Breakker get another big win while showcasing his style and abilities, but they also included a bit of smoke and mirror shit to drop building blocks. It was fine for what it was and I appreciate it for that. Bron can be a huge star if they do things right, I just have little faith in WWE being able to pull it off.

Some of the segments included on V-Day included Cora training with Raquel, Choo looking for a partner, some friend zoned style stuff at a bar, Knight drama with some cops, Ciampa saying he'll protect the brand, and Solo interrupting Imperium.

I didn't really care much about, nor for, any of those if I am being honest.

The entire show was fine and had some good wrestling, but I also feel the closest thing we got that felt like it could have competed with content from a TakeOver show was the North American Championship defense. The brand has a purpose now and is continuing to evolve, with the new Level Up replacing 205 to add to the cycle. Still, it is a bit depressing knowing what we've lost in exchange for something I have little faith in.