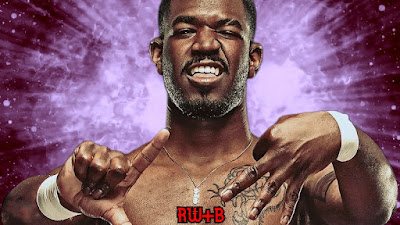 We started with Punk sitting in the ring this week, announcing the details of his rematch with MJF. CM Punk picked a dog collar match and admittedly I am stoked. This kinky ass old gimmick can be awesome when done well and...yeah, these are the right dudes to do it.

That was a solid start to the episode. Oh, and Jungle Boy loves threesomes.

Next we had a badass battle between The American Dragon and Genkai! Also, that Old Yeller sign was awesome. I fucking love shit like this and want it on national television as often as possible. Go out of your way to at least catch this one if nothing else from the episode.

After, Danielson grabbed a mic, mocked Americans, and called out Mox for an answer. Of course, Jon joined and he gave us a history lesson. In the end, he made it clear that he and Bryan would have to bleed together before they could team together.

I dig it. Good shit.

Wardlow put down Max. It was fine I guess.

They built up the no disqualification match a bit next.

Next, we had Page and Cole in a segment that ended with reDRagon and AC beating down the champ. Dark Order made the save and Ten went off. A bit clunky perhaps, but a solid segment.

The Inner Circle civil war was an okay tag match and saw Santana and Ortiz win clean, pinning Jericho. Kingston and Chris had to be pulled apart after. It underdelivered, but worked fine as a building block.

Cole and Ten are set for Friday and we're teased with a reDRagon/Bucks match on the horizon.

Thunder Rosa and Martinez's hardcore match was certainly rough around the edges, but it was a good one regardless. The right person won too, adding to the story.

Baker and crew came out after to attack TR, with guidance from a certain Karate Kid. Martinez stalled in helping and was attacked, too.

The House of Black teased a new member coming soon.

We closed with a great main event for the TNT Championship. It was a bit circus act on the finish, but the entire thing worked well as a send off. Andrade cost Darby a chance at winning, setting up the next chapter of their angle and Matt joined in on attacking after. Sammy and Sting ran off the heels.

They need to figure out how to continue growing their audience, as nice as their niche is. They also have a good problem in the sense that they are stacked. The only reason that is an issue at all is because, while floating people to keep angles and workers fresh, it also leads to talented people either being stuck on YouTube or in catering or having their contracts expire without renewal.

Hopefully they can figure out how to fix issue one while better utilizing things to make number two a non-issue as much as possible.

Anyway, this was a good two hours of wrestling. While far from their peaks, it was also far from the lows and was worth either watching in full or, at the very least, via YouTube videos that catch your interest.