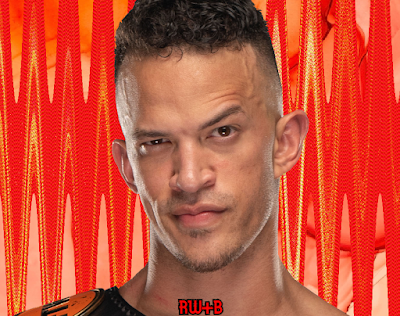 We started this week's episode with a quick win for Cole, bouncing back from his L to Orange Cassidy. It is sad seeing Uno fall so quickly just to be a rebound win, but alas it is what it is. After, Cole talked about being undefeated. Since the Cassidy match was Lights Out, this is true from an official record kayfabe standpoint. He promises to be a complete cunt moving forward and I love it!

The greenest champ in AEW laughs about the fact.

The TNT Championship defense was good, though not a must-see affair. Still, Kassidy served as a solid throwaway defense for Sammy. The champ is carrying around both belts after the ladder bout with Cody, interestingly enough. Andrade came out to watch, stared down the champ with Matt after, but were ran off by Darby. Allin took a good long look at the strap to end the segment.

Keith Lee coming in next week will be awesome. Him, or Jeff, are my picks at least for the situation.

QT is still pissy about Hook. This week Hook broke the trend of appearing on Rampage.

Hirsch slapped Kris with a chair. She was choking, I'm sure!

Next up, women's action. Mercedes is a very talented vet that will add a lot of wisdom to the roster. A match against Thunder looked promising and I expected something in the mid-three star range from the pair. Instead, this was just a building block. They went about seven minutes deep before Martinez wacked Rosa with a pipe to give us a rare, for AEW, DQ finish.

A backstage interview segment with Mercedes and Tony was interrupted by Baker and crew. It came off pretty well.

The main event saw Lethal challenging for the FTW strap. I'd note that it featured Hobbs and Dante in spots, too. The only non-black person involved was Bryce. I think that was on purpose. A side note, but shouldn't FTW defenses be Lights Out? Anyway, this was a match spotlighting dudes that need more TV time and it was a fairly good contest. While I think they stuck below that "next level" threshold by a hair, I still appreciated the work for sure. For a TV main event that went just over ten, this worked well.

In all, this episode might have lacked a must-see match but the entire thing did what Rampage does well, providing an hour of action that felt shorter than it was. They pushed angles, there was some good wrestling, and I enjoyed the piece of entertainment for what it was even if it wasn't a bit deal. If you're just wanting a chill rider installment of televised pro wrestling, this is worth your consideration. If you're only wanting the best of the best, you can skip it.