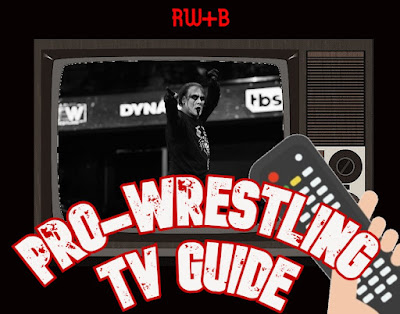 Things change so I will try to update this throughout the year as needed to accommodate any major switches. If I missed something, feel free to let me know. While this is more focused on US based fans, I hope it still is of service to global visitors, too. Note that shows like ChocoProLive! and others without set days that they air are not listed here. Last, if the time the show airs changes a bit or is unknown, but it regularly airs on that day, it will be listed minus a time next to the channel/streaming site.

All air times listed are EST.

I personally recommend watching Ring of Honor in normal conditions. While the company is on hiatus, I instead would suggest Elevation if the card looks appealing enough that day. Consider Raw on Hulu and skip the 3 hour version unless you're a diehard WWE fan.

* the promotion is on hiatus and episodes will, for now, largely be best-of editions and compilations, seemingly.
** occasionally they air special editions on other days.
*** a condensed version, that tends to be more appealing to many, runs on Hulu the day after.

I recommend STARDOM's weekly, jampacked show for Tuesdays. It's only 30-minutes and tends to be full of exciting action!

* when in season, requires membership that costs $4.99 a month or you can just wait until Friday and watch for free on their YouTube channel.
** occasionally they air special editions on other days.
*** recently moved from Wednesdays to start the year. I am unsure if the day shift will stick.

Dynamite is the easy recommendation for Wednesdays. Not every episode will be a home run, but they are more than not and even the weakest episodes have redeeming qualities.

Honestly, this one is hard. NXT UK is very much what NXT was a few years ago and has an appeal about it. New Japan on AXS appears to be airing old content this time around, for now at least, but if you are new-ish to the product it's an easy pick. IMPACT! is far better than folks give credit for and has a solid roster and decent writing though, so give them a nod and a shot here first.

*Azteca has currently replaced Fusion and Fusion: Alpha as the weekly series for MLW.

Rampage is a shot of adrenaline. It's AEW Dynamite without the fat, jammed into an hour long package and can be better than their Wednesday series some weeks. Give this one priority.

DG doesn't air each week, but make it your first choice when new episodes do drop. Other weeks, consider New Japan's STRONG series.

*Uploads occur on Saturdays but not every week and seemingly not always at 4.

Honestly, try CMLL out on Sundays. They have a lot of issues and are, in many ways, the WWE of Mexico, but it can be fun stuff and occasionally you'll get real gems when the roster is properly motivated.