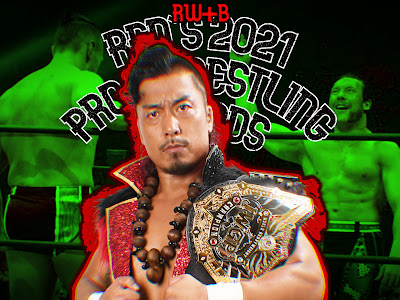 It's that time again, ladies, gentlemen, and nonbinaries. That's right, I am back to announce my awards for the best of the best for another year of content! Drop a comment with your picks if you'd like. I always love feedback and to see outside opinions!

MATCH OF THE YEAR: DANIELSON vs OMEGA

This one was a masterpiece of drama and violence and one of my favorite matches of all time. This award category was packed as 2021 had more ***** matches than ever before in my opinion, but one stood above the rest. The Cleaner and The American Dragon waged war and we were all witnesses to the brilliance!

MEN'S WRESTLER OF THE YEAR: SHINGO

As amazing as it was to see Omega's 2021 output, there's one man that simply outperformed him and that was New Japan's SHINGO. The Dragon logged numerous must-see encounters, held the top prize of the King of Sports, and rocked in the G1. 2021 was truly his year to shine.

WOMEN'S WRESTLER OF THE YEAR: UTAMI

STARDOM rocked last year and Utami was a major player throughout. She held the World of STARDOM Championship for 409 days and had 8 successful defenses before falling to the runner up for this category. She turned away Maika twice, Saya, Bea, Syuri, Tora, Iroha, and Hazuki and made everyone she faced along the way come off amazing.

TAG TEAM OF THE YEAR: THE YOUNG BUCKS

Love them or hate them, they once again fucking rocked last year. They are cocky pricks you love to hate but they also work their asses off every time they touch the mat. This was just as true last year as it always is and no one really came that close.

UNIT OF THE YEAR: THE ELITE

Kenny, Matt, Nick, Anderson, Gallows. Add in Cole at the end of the year. These dudes simply dominate at what they do. Write them off if you will, but it's hard to ignore the quality of work on display and the must-see angles that come out of this squad. There's a reason why BTE remains a hit for fans and why AEW is doing so well and The Elite are a big part of that buzz.

PROMOTION OF THE YEAR: ALL ELITE WRESTLING

I mean, is this really a surprise? Dynamite was constantly a rewarding experience and provided for two hours a week of excellent entertainment. Rampage was a nice addition to the fold, too. The roster is perhaps the best wrestling roster of all time, the writing is usually enjoyable, and the special events left fans wanting more. New Japan had a massive dip once again and only won runner up because of the roster making the best out of a bad situation while AEW ran wild.

BEST TV PROGRAM OF THE YEAR: WE ARE STARDOM!!

This was a hard one. Dynamite is a fantastic show and most fans will pick that series as their favorite. I agree with the claims and consider the show to be awesome. It's a modern Nitro, folks. That said, STARDOM's YouTube weekly has been consistently a highlight for me. The 30-minute runtime is great and each edition feels like a spark of energy. I also feel that it had fewer lesser installments than Dynamite, which did have a few dips occasionally in 2021. If you aren't checking out We are STARDOM!! each week, you're missing out!

Hana's death was tragic and left a hole in the hearts of many. This event was a thing of beauty and hopefully gave hope to some that were still hurting. The contests dripped of passion and were excellent in general. Simply put, it was a perfect show.

Honorable Mention: AEW All Out

The American Dragon is back. After a noteworthy final chapter in WWE, Bryan showed that he still had that dangerous spark inside of him and has been working seemingly harder than ever before.

While there were luchadores that had better catalog of content in 2021, I had to give this one to Vikingo. Like the year before with Laredo, this kid took all of the momentum he's built for himself and closed the year with the biggest victory of his career. He didn't get his Omega match, but the dude is for sure the most important figure in the genre right now.

Kenny shut up the haters with numerous must-see battles and was a force in 2021. He held the top prizes of three of the main brands in North America and was a major focal point on wrestling television as a result. Haters couldn't shut up about him and lovers rejoiced! He'll be back soon, but I'm thankful for his 2021 run regardless of what form he's in when he returns.

The Tech-Wizard doesn't get nearly enough credit for his work. His matches feel like an artist with a brush at times and his output last year truly showcased it. I just wish NJPW would give him a chance. I doubt he'll ever be treated as more than a midcarder, but it'll be a top shelf ride along the way regardless.

This dude's 2021 output was remarkable. I've been on the SHINGO train for many years now, but I didn't expect that many hits, that frequently. He's my Japanese WOTY, my overall men's WOTY, and...

New Japan is not what it was just a few years ago. The roster remains amazing and makes the best of what they're given, but the dip is impossible to ignore. In 2021, Ospreay was given the nod but then suffered an injury that forced a vacancy. SHINGO stepped up big throughout the 12 months, but even bigger when they needed to fill that gap. He was arguably the biggest reason to watch New Japan in 2021 and deserves a lot of praise for it.

Commentator of the Year: Excalibur

Personally, I think Excalibur is the best at what he does. The dude knows more about wrestling than most people could ever forget, unless their name is Chris Hero, and can make the matches he talks over come off as more important than they are. He perfected the art in PWG and took that passion to a bigger stage. You can hear the love of the art in his voice and I appreciate it. There are many that do a fantastic job, but none better than this masked dipshit.

Best Talker of the Year: MJF

MJF might not a dude that can pump out classics over and over again, but when he has a stick in his hand it's a weapon. Hell, he arguably outdid Punk and Kingston. He holds crowds in the palms of his hands and controls the narrative with expertise more often than not. This one was simply easy to pick and I don't think many would consider it anywhere close to a controversial pick, either.