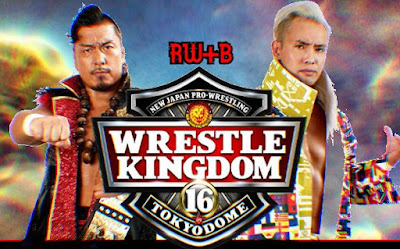 The last three matches of the show are the worthwhile encounters and the main was must-see. I'd argue that Shibata's first real wrestling match is worthwhile too due to the circumstances, even if I personally cringed a tiny bit throughout. The rest of the show kept this far below my expectations, though. In fact, this was one of the worst Wrestle Kingdom titled shows I've ever seen.

A tale of two shows?

Up first, we had SHO and YOH continue their program. It was okay, but never kicked out of second gear and the finish was weak. SHO was always the standout of RPG3k and always seemed destined to break out, but the House of Torture stuff isn't doing him any favors right now and YOH going over just felt wrong.

The second bout was average stuff that ended with Tanahashi attacking KENTA with a kendo stick. That's about all I care to write about it.

Things stayed in the basic territory with the next one, a six-man meant to promote content from night two. It didn't make me care much on its own and felt like a house show contest at best.

The best thing from the first half of the event was easily Shibata's first true match in years. The story work of teacher versus student and the little touches throughout made it enjoyable, even if it's not recommendable on pure quality merits. It's hard seeing any shots to The Wrestler after his awful injury, but I'm still happy to see him in a ring doing what he loves, too. He'll never be the same, but that's okay.

House of Go-Away-Heat shit followed. EVIL has been such a chore since his heel turn. How the fuck do you make an Ishii match this bad? It's embarrassing. Truly.

As mentioned above, the last half stepped up.

The IWGP Tag defense was great stuff and it was nice seeing Yoshi get his big moment finally on this stage. I'm intrigued more by this division right now than I have been in years.

Moving on, the semi saw Hiromu surprisingly fail to beat El Desperado as the champ retained in a match that never hit the levels I expected. The pace was decent and there were several nice spots, but overall it felt a bit off and more like a downcard contest than anything else while still being great. A bit of a paradox.

Main event time. The show needed a homerun and it got it here. I am beyond excited that SHINGO got a run at the top and hope he has many more. He easily could have a Go 2020 run. I get the change here though and Okada will remain a safe bet for many more years to come. Regardless, these two are elite performers and two of the best ever. They've had epics in the recent past and they added yet another here with this one. If you skipped off, fix that and make this your must-see bout of night one for sure!

Post, Okada took the V4 and retired it. Tragic.

This show proved that WK should be one night, especially in the modern era of New Japan. There were enjoyable moments, the tag and junior defenses were great, and the main was awesome, but the show suffered regardless. I expect more from this brand and they keep letting me down lately.