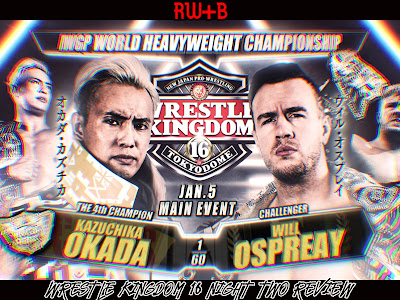 3.King of Pro-Wrestling Title: Suzuki vs Yano vs CIMA vs Owens ***

After a disappointing night one, with only the main event really standing out as an epic encounter, I was hoping night two would be a better evening of action. This is fucking Wrestle Kingdom, people! Spoiler alert, but it was indeed superior.

Up first, we had a three team spotfest for the junior duo straps. I like the duo of Eagles and TM. Everyone did well in their roles and it was about what I expected. Fairly good stuff and a solid kickoff.

Next, we finally saw STARDOM roster members on the main card after being stuck on dark matches previously. Let the misogynist tears pour heavily and the excuses die in a car crash. This also was a great contest that works very well as a spotlight showcase for the four and the brand.

Third, a four-way for a convoluted title no one actually cares about. The Suzuki and CIMA stuff was good, Owens was okay, and Yano was Yano. Just enough to be "good" but completely forgettable stuff regardless.

In the four spot, we had the House of Torture crew in action sadly as SHO continues to be dragged down by the bullshit. This sucked and was a waste of ten minutes.

Admittedly the NOAH invasion angle spot came off a bit weird, but I am excited to see the payoff. Hopefully I'll get to that show soon.

Next up, Naito and Cobb had a fun blowoff match. I liked the pacing, tone, and even the limb work was well done. Tetsuya is always entertaining and Cobb continues to play his role well. Great stuff.

The semi was fantastic. I get that some might be turned off by the layout and speed of this one, but I really enjoyed it. The use of weapons worked very well and everything came off super well, too. Proof that hardcore matches should be used a tad more often in New Japan?

What remained was the main event which saw Ospreay and Okada face off with the winner walking out the "real" IWGP World Heavyweight Champion. It was a near-perfect battle of wills and an awesome display of fighting spirit. This one is a MOTYC and an epic that should be seen by all fans.

Night two was far better, though still left me reminded that NJPW isn't the same as it was not that long ago. They'll still remain contenders for Promotion of the Year time and time again because of how amazing their core is, but they are failing to hit their potential as a brand. Regardless, I urge fans that won't watch the full event to consider the last three while specifically prioritizing the last two.