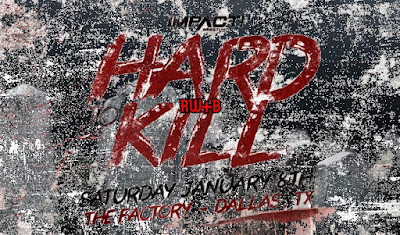 After watching one of the pre-show matches I took a look at this card and decided to pull the trigger. I appreciate the company for what it is and consider the roster and overall program far better than what people give it credit for.

The show opened with the first ever women's Ultimate X match, which was a bit rough but largely good. I honestly am surprised it took this long before they ran this because, despite rarely getting credit for it, TNA/IMPACT have a long history of being more progressive than a lot of their contemporaries. Steelz took the W. I hope they run this back as I think it'll get better and better.

Trey and Maclin had a very good, borderline great, X-Division Championship match in the two spot. The pacing was all over the place thanks to the dynamic at play, but they worked hard enough that it played off pretty well. Trey winning was the right call in my opinion, too.

The Influence had a backstage promo spot to build up their rivalry with the IInspiration.

Next, a pure rules match for the Ring of Honor World Championship! What a treat. Jon is a master of the genre and Sabin is a great hybrid dude that can do just about anything so this was a great pick and it was a great match, too. I love stuff like this and mileage will vary, though.

Steelz got a backstage promo.

JONAH and Alexander was the match I was most looking forward to on the card. Josh continues to be awesome in whatever he's given, even if it's a bad angle, and JONAH is a great worker that clearly has a lot to prove after WWE fucked up. There were audio issues during this one but I have a tendency of watching a lot of stuff muted so it wasn't a big deal to me. It might be to you. Later there was another technical error that mute couldn't fix as the feed momentarily cut away. It doesn't matter because this fucking rocked. Good intensity and storytelling here and a fantastic match overall.

This show is pretty fun.

Pre-HxC War backstage promos and packages lead us to the next one. Between the South Park and Anchorman 2 references, and despite Anderson and Gallows being bad multiple times here, this was actually far better than expected. I dig chaotic hardcore shit, though.

Ring of Honor invaded after, taking out the victorious faces. The entire angle was entertaining.

The World Championship match was Attitude Era style stuff and I could have done without a lot of the shit, but the work and some of the spots were enough for me to call it fairly good regardless. This one is for sure a polarizer, though.

They closed with Mickie James and Deonna in a Texas Death Match for the Knockouts strap. The gimmick can be hard to pull off and I honestly wasn't sure it should close the show when I got to it because of pacing reasons. I was wrong and they also did pull it off. The former champ also happened to come off strong, though I wish they wouldn't have had the interference bullshit. Also, the last minute or so came off poorly. Still, this was good stuff and I think it worked well enough to cap things off.

I'll be blunt. IMPACT is a company I have defended a lot over the years. I get that they get outdone by others, but their weekly show tends to be creative and their big shows tend to be pretty enjoyable. You can tell they're trying and I appreciate the effort. The roster is fun and each month I find a few things worth recommending. I know they will forever have that TNA stink on them that some fans refuse to look past, but Hard to Kill started the year on a strong note and was honestly one of their best special events that I've seen. You should watch this and give them a shot. If you still hate it or just don't think it's worth the time, that's fine. To each their own and all of that jazz. I just know a lot of fans are missing out on quality content for a variety of reasons and I think that's a shame.