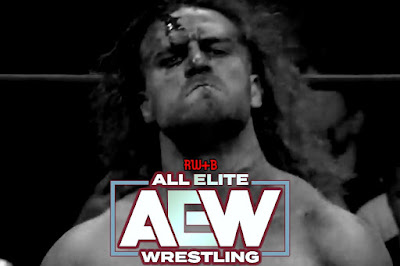 The Jersey crowd didn't bring it here. It is what it is.

The opener was another near perfect outing and the definitive finish solidified Page as champion to start the new year. I loved the pacing and layout and thought the color added perfectly to the overall package. I strongly recommend this one to fans of the art.

Next, Punk hit Dean with a GTS setting up a DQ finish which gave MJF an L to start the year. The entire thing was a solid follow up to the world title defense.

The show dipped considerably after this.

Jericho's segment with 2point0 did little for me and felt like something WWE would air (and that I'd then turn off).

Atlas versus Cole is announced for Rampage.

Wardlow killed a man as he continues to get over ahead of his face turn.

Jade's kid is then shown, proving the outcome of the TBS Championship match before it happened.

Goldberg won the match. It was not good. She is not very good, either. I couldn't care less about this new belt. Mercedes and Rosa should be good and Ruby versus Baker should be fun again too, at least.

Shida versus Deeb is set for another chapter, which will rock.

Black and Pillman was fine, but nothing special. The lights out stuff tonight in general were a bit janky, by the way.

The main event bookended the show decently to make it end on a high note, at least. While it didn't hit that next level I had hoped for, this was still a good one and the title change is interesting for sure. Fenix was injured during the table spot but should be back pretty soon if the report I was given is accurate. It looked terrible and I wish him a speedy recovery for sure.

I was actually wearing my Mandalorian themed Jurassic Express shirt while watching this. My son is a big fan of the team and I'll be showing him the YT video today.

Not every week is a homerun. Their TBS era debut kicked off with an amazing performance. The Punk segment worked well as a follow up. The main event was a tone setter and closed the show nicely enough. The rest likely turned some away, but in all it was a good episode thanks to the high points. If you missed it, just watch those three things and skip the rest, though.