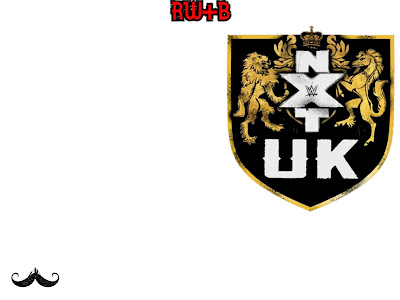 3.Moustache Mountain vs Symbiosis vs Carter, Ashton vs Mastiff, Starz ***3/4

I've been getting into NXT UK lately, as frequent visitors have likely noticed. Not that long ago, 205Live was my favorite weekly WWE series. NXT for a while, too. Both have been changed and shifted far away from the products I used to enjoy, though. NXT UK has been enjoyable the past few watches I've made time for and I think this one is a good test.

Without any major spotlight matches, will it still be enjoyable?

Let me preface this real quick with an acknowledgment. WWE killed the European wrestling scene. Them and the #SpeakingOut movement. The latter is fine and I think we need another wave to take out more of the poison in the industry. Not in a cancelling manner like some try to promote, but in an accountability fashion for those doing more egregious acts. Back to WWE, though, and it was a delebrate attempt to take control of an area and they managed just that. The first few times I tried to watch the product, it felt a lot like a soulless version of what I was watching before. PROGRESS, for example, used to have such an aura about it. Even with much of the same roster, WWE just couldn't replicate the tone.

Even with the "praise" I have given the brand, this is still a far cry from things that existed previously in the UK region. There's pros and cons of course and I am happy that the signed roster members, largely free from the "budget cuts" thus far, seem to be enjoying themselves. There is a lot of brilliant talent in the area and they deserve a spotlight. I am not huge on the production still, as WWE loves camera cuts way too much, I'd note that they are kept toned down here. Closer to pre-USA NXT, before Vince sacrificed that brand just so it could fail against AEW.

It actually helped keep the numbers down for a while so it had a purpose, but it was sacrificed regardless.

Anyway, you can tell the brass barely pays attention to NXT UK and the show is far better for it.

Back to this episode though, and we started with Frazer and Andrews working a pretty good, ten minute match. The right man won, both looked solid throughout, and it kicked the show off with a spark. A better finish might have elevated it a tad, but that's the sole nitpick and I have no legit complaints to vocalize.

They aired a package showcasing the Ilja/Rampage drama from the last episode and we got a few segments. None were terrible, none were must-see. It's WWE television on a show that WWE sees as a F-show and it was about the level you should expect from such a brand.

During one of the backstage spots, you can see a bunch of old WWE logos on the walls.

The second match also featured a Subculture member, with Luna taking on Turner in singles action. It was okay and they did about the best they could with the time given.

The main event was to crown number one contenders for the NXT UK Tag Team Championships and was an absolutely great, shitshow clusterfuck of a match. Sincerely fun stuff.

The show ended with the brand tag champs, coming from their Magic Mike stuff, to face off with the winners.

So yeah, this show has a charm. The wrestlers clearly are trying their best in the system they are in and it somehow works, despite being janky at the same time. I dig it.