Why Evangelical Christians are Wrong About Homosexuality 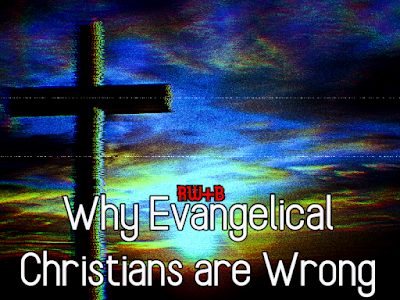 "Being taught that there was something wrong with homosexuality didn't stop me from being who I am. It just made me ignore it and hate myself for it for most of my life. I still struggle with it."

That is a quote I got from a random source years ago and it is one of the most tragic things that I have ever heard in my life. What do you even say to that? I was left in a sudden hole without words to respond. I haven't spoken to him since that night. He never really cared much for me in our previous interactions, perhaps judging me for being straight. Not in a mean way, necessarily, but more an understandable-ish hatred. A representation of what he was told to be. But that night, at a college party, we were all a little drunk.

I hope you're doing well. I am sorry I didn't know what to say.

Any reply would feel cheap.

I don't believe for one second that any god worth devoting yourself to would want someone to feel that kind of pain in themselves just because they love people in a different way than the "status quo". If you do, I must ask...why?

And, if I'm being blunt, I sometimes wonder if it's just another symptom of that ole' status quo we have around here. Feeling constantly dumped on without answers does that to the best of us. But, why do so many of us feel the need to punch down?

A few years back, I attended an event at Blinn College. I helped put it together, working for an ally group. There were to be speakers in front of a moderately sized crowd for the room size, followed by questions.

You could tell quickly that the tone was going to be interesting, as both of the speakers actually pretty respectful. One was a professor, if memory serves me right, and the other was an orthodox priest. The professor was debating in favor while the priest was to be in opposition.

The latter's stance was that sexual acts out of wedlock were sinful, as they were in heterosexual relationships. That the entire purpose of love and marriage is to be fruitful and fuck like bunnies. My words not his. But he also allowed leniency to the idea of gay marriage as long as the couple were willing to adopt as many children as they could afford.

While I have disagreements with that stance, I find it far more respectful than basically anything else I ever hear on the subject.

Can we also have a bit of a history lesson here?

So, I first would like to remind everyone that The Bible is a very old book. Not as old as some believe, but pretty fucking old regardless. To read it in various forms of English we have had to translate it across other very old languages. People misunderstand how quickly languages change over time. Watch a movie from the black and white times and tell me how often you see folks talking like that in your every day lives. The only people that would even see that currently are living in some weird cult style town somewhere off the main streets and we should pray for them.

If you actually read the oldest versions of what we have, every evangelical's favorite quote to scream at people actually condemns pedophilia.

Lets pause now and address an elephant in the room.

That was a tacky Republican pun there, for those keeping track.

I know many evangelicals are supporters of Trump. More than a few are also followers of qanon. That means there are a lot of folks that tweet out things about saving children. They point their fingers at Democrats, celebrities, and any Republican they disagree with.

HERE'S an interesting link. You can find numerous sources better than that one, but they all show a tendency. One I won't ignore is that the Democrats have an issue with that behavior, too.

A certain disgraced New York Democrat is the latest big-namer. The fact that they all ignored the covering up of information, the deaths in the retirement homes, and the blatant corruption is telling. He didn't face real consequences until those allegations came out. The party tries hard to maintain a morally superior appearance to voters because they think it assists them at the polls. It helps them a tad in the midterms after they're elected and they haven't done anything they had promised.

But my issue is that the poster child for all of this behavior of politically charged pointedness is a dude with several allegations as well. I know many explain them away, but I don't buy any of the excuses. Say whatever you want about what that means about me, but let me tell you now that I am not a guy who really ever votes for Democrats, so you're takes are likely going to be way off.

My bigger point is that both parties have a lot of history of allegations and convictions. Many important people are in the news all of the time for the same thing. This isn't new because every time society has pillars, many in power turn out to be perverts. For as long as history has been recorded.

It's a symptom of the power, I'd argue.

Anyway, the people that handle Bible translations tend to be rather powerful, or answer to those that are. So, it seems understandable why they might want to tweak such a translation.

Would it surprise you if I told you that the first time I heard any of this was at that college event I mentioned above?

The priest detailed all of this and elaborated that some historians believe Leviticus was condemning sodomy during wartime as an act of violence.

I do know that there are many ugly parts of The Bible, but one of the ugliest has been 18:22, simply because of the terrible acts that have been done in the name of it. Murders, suicides, and terrible lives have come at the hands of this set of words, and I'm pretty sure that's not what the words in that book are supposed to translate into.

But maybe I am completely wrong. My words here don't matter in the end, because gay people will exist forever however they must and there will always be people punching in the wrong direction, too.

I just hope that I helped at least one person change their mind with this post, because I think we should all want people to be able to feel love without burden and to live lives the way they'd want for themselves.

Oh, and God put the man's clit in his ass. There has to have been a reason for that.

Other Things of Note Why Evangelical Christians are Wrong

On CM Punk and that...entire situation

I wrote recently on this site that I don't care much about the dramatic stories coming out of the AEW locker room of late. I largely didn't, though there were a few exceptions. That changed recently and I am pretty sure that anyone currently reading this likely knows why. For those of you that are somehow unaware, check out the video at the top. The best info available to me, including a source or two directly that are typically good in these situations, is that Punk and Acey were involved in a brawl backstage with The Elite following the media scrum. Bites occurred and chairs were thrown. The Elite are also in some shit for not rising above. I admittedly find this entire thing wildly entertaining and have no problem admitting it. I want the insanity to continue. I want Punk on TV this week dogging on everyone and a real shoot fight to follow immediately after. I want Punk to promise to apologize, like what TK wants right now as part of a redemption attempt by the bossman, and