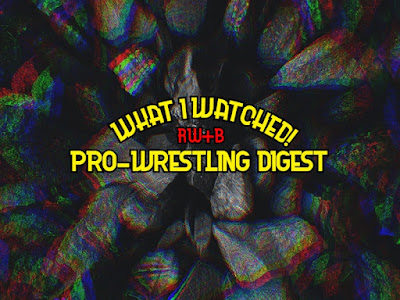 I'm further switching up the format, moving forward with a new direction for the site.

I'll just post what wrestling I watch in general and see how that goes.

Monday night I caught up on a narrowed down July group of matches that I had watched.

First up, I checked out a STRONGHEARTS match from the debut of GLEAT.

Issei picking up the victory here felt like a big deal and the entire match was a nice paced, fantastic six-man tag team battle. I really appreciated this and am excited for GLEAT, despite the awful name.

Next, some championship action from Ring of Honor.

This is the one that saw Rush drop the belt and his (alleged) diva act begin. I saw a comic recently joking that the awful ROH news recently caused the former champ to have a miracle moment. It felt a lot like something I'd see in IWRG, honestly.

So, the match was fantastic. I liked the intensity and the build, but I didn't care as much for the finish. It felt very much like a political finish (it was) and the post-match attack from LFI felt about as good as the Moose/Alexander thing from IMPACT recently.

This one rocked. Marufuji is like Tanahashi in that he can still perform ace level shit even in old age. Naomichi rocked and Takashi continues to put in major, badass performance time and time again. This is a near-MOTYC and a nice little Summer gem.

This one, from the Grand Slam in Tokyo Dome gig, was a fucking epic. A MOTYC. A near-classic. Tanahashi continues to be an ageless wonder and SHINGO remains the best wrestler not named Omega, Kento, or Mayu. With a tone that sung close to a strong drama, this built and built and was just an awesome display.

To close the evening, we have Dunne and Ilja from NXT #467. Not enough aired here to rate, but it felt like a good preview for a match later on my pull list. The aired content had decent work but I didn't care for the finish. I'm not big on shit finishes and I also find it beyond iffy for Ilja to drop a match, even with the distraction, right before a big title shot.

The post-match was good.

I then watched THIS stream of AAA's TripleMania on Wednesday, having taken Tuesday off. Check out my review of the event HERE.

Up first, we had Edge and Rollins in singles action followed by Cena versus Reigns. My review of the two should be up this evening and, with luck, my thoughts on the Ilja/WALTER battle, too.

Yeah, this one, from Summerslam, fucking rocked. The pacing was fantastic, the drama was top notch, and the work from both men was a cherry placed right on top of badass mountain. Edge is wrestling his best matches of his career right now, clearly, and Seth really stepped up big to match his energy. Strongly recommended.

I took a pause between this and the other Summerslam match to watch AEW Dynamite live. Check out my LIVE REVIEW HERE!

Speaking of dudes performing at high levels despite being late in their careers, we have Cena returning and putting in for a fantastic title match with Roman to close the show. The outcome wasn't truly in question at any point, but they made it work regardless and it came off very well. The post-match return of Brock was an okay way to top it all off. Not too shabby.

I jumped ahead a tad before crashing for the night. It just felt light enough to close the night on a chill note. That's not to say this wasn't a hard hitting affair, though. Just not something as heavy in tone as what I am expecting from the WALTER/Ilja match. Drew rocked, Sheamus was good, and Priest came off well. Very good throwaway defense.

That's it for tonight. I should be back tomorrow for more of this, plus the next dWo entry.

Jump ahead, and it's Thursday night. I watched the Edge/Rollins rematch first.

So, I see that a lot of people seem to consider this as being on par with the Summerslam match. Personally, I thought it was very good and I liked the storytelling, but I don't think it was anywhere near that level. To each their own? I appreciated the drama and action and recommend it, even if I don't think it clicked as well as #1.

Keeping with WWE, at the request of my kiddos before bed, I jumped to a a few matches from Raw back in September.

For this, I just watched the linked video which was about three minutes long. Neither were long enough to rate, but it was all fine. The first part was about a minute long and saw Orton attacking MVP but then he ate a spear from the champ and was pinned. He beat down Riddle after and then it jumped ahead and the champ was limping all of the sudden. Big E's tunes hit, he runs out, a few seconds later we have a new champ. It didn't show that part, jumping ahead to him holding the belt, by the way. Like I said, it was fine and I'm happy to see Big E as champ. I'll leave it at that.

I saw THIS next, with "you deserve it" chants being thrown at Big E. Good stuff. He called out Bloodline and got 'em, with a nice standoff to end the stream.

Bloodline vs The New Day

This one I also watched via the YT highlight video. Too short to rate, but I enjoyed it. I have no idea why a DQ wasn't called, though. It all set up the episode main event which, when coupled with the previous segment, is more advanced than what I tend to expect from WWE these days even with the iffy stuff. Lashley came off golden.

It was 20 minutes but didn't feel like it. Hard work from all three and a nice use of the gimmick. Big dog stuff with al three coming off well. What's not to like (other than the typical trash camera work).

Why not cap off the WWE stuff tonight?

This was a great ladder match. Good spots, some drama and story work. I have basically no complaints. It won't considered anywhere near the elite of ladder matches, but that's fine. Props.

Next I watched NXT TakeOver 36 before bed. Read my review of the full show HERE.

A lot happened this weekend. I made time Sunday morning for some CMLL, though. Most of the pull list will roll over to next week and I'll add stuff to it.

I'm a sucker for a good cibernetico. This was a fantastic cibernetico. It's my favorite match gimmick and one of the few things modern CMLL does well. Even Volador stepped up here. Strongly recommended!

I don't think this one hit the same level as the other semi, but it was still pretty good overall. Once again, everyone stepped up decently enough and there were numerous highlights worth seeing. It just didn't click the same way. Worth checking out, but prioritize the other first.

It's clearly that time of the year (when this took place, at least) because Volador actually worked semi-hard. He and Gran Guerrero put in for a great battle. Strong pacing helped the 20 minutes feel like 10. Check out the highlight reel linked above at the very least.

I don't tend to care much about crowd response, but it's notable that the reaction was tame here. They did the best they could given the circumstances, but it ran only about ten minutes long and was an unannounced single fall match. Instead of a big show apuesta, this felt like a throwaway lightning match that happened to feature a hair cut after. Almost good, but a huge disappointment overall.

The kids woke up and wanted to watch a bit of AEW. I'll make time for Full Gear hopefully tomorrow.

While I'd argue this one was just inches outside of recommendation levels, I still appreciated the work and storytelling on display. Jungle was the right dude to get the win and the post is perhaps the most important part of the entire thing. Fish could've sold a touch longer but that's my only tiny nitpick. Drama!

I skipped the Dante match, but I did catch Team Taz offering him a spot on the team. Interesting development. I hope he declines, personally. I'm pretty sure he will.

This was overbooked chaos, but it was entertaining as well. The match gimmick rarely provides for something must-see, but I appreciated this for what it was. The finish felt off, even with Matt's later Twitter explanation, but didn't really hurt the rating much. In all, an okay next chapter to the ongoing angle.

That's it for this week. Thanks for reading and expect #3 to start tomorrow, alongside the overdo next entry into the dWo series.

Yesterday, I purchased an RV. It's something I've been planning on doing for a very long time so I am pretty excited. I have been in groups on FB for years, have read books, and even stayed in a 5th wheel for a few months in Florida a couple of years ago. In case you're curious, I picked up a 2002 Gulfstream Conquest Ultra C. It needs a bit of love and I'll need to get it ready for winter quickly, but for the price I have a hard time complaining. I'll be logging my adventures here in this new ongoing series, which hopefully will be not only a set of vent and rant pieces but also will feature things that will be helpful to others.

Matches: 1.Million $ Title: LA Knight(c) vs Cameron Grimes **** 2.NXT Women's Title: Raquel Gonzalez(c) vs Dakota Kai ***1/2 3.NXT UK Title: WALTER(c) vs Ilja Dragunov ***** 4.Best 2/3 Falls: Adam Cole vs Kyle O'Reilly **** 5.NXT Title: Karrion Kross(c) vs Samoa Joe ***1/4 Thoughts: Time to dive in to the end of an era. NXT dipped in quality once AEW hit the scene, but even then it was a fun show a lot of the time. It's continued to dip and I've all but lost interest in the new 2.0 run. There was a time when TakeOver events were the most must-see thing in wrestling and I'm going to miss those days. WWE finally found someone to tell Vince that the problem wasn't how good the wrestling on NXT was that the roster wouldn't work with main roster content, but that they needed to take over the last great part of the company and nerf it, too. Whatever. Lets celebrate the end with a very late review, why don't we!? The Million Dollar Championship is on the line

Consider this the first entry in a new concept that I am attempting. Consider the last entry in the series a post zero, meant as a primer for what I'm attempting here instead of something else. Admittedly this is inspired by one of my top five sites, and I hope it comes off well. Let me know what you think or whatever. Also, note that this post officially ends my recent WWE protest. I care about the talent far more than the shitty billionaires and their logos anyway and I've made my point.  I do not post things here in support of Vince nor his logo, nor of the 100000 camera cuts per episode of their barely watchable content. I don't care about him and dislike the production quality, but appreciate the workers trying their best to make that shit work. Remember folks, there's no such thing as a moral billionaire. I hope this helps make things far easier for me time-wise and more entertaining for y'all to read instead. Anything that I don't watch a full event or ep