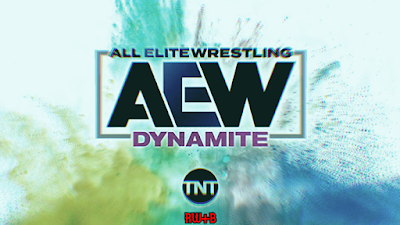 We're kicking off with a banger this week, and one with a lot of history tied into it. These two are two of the most well respected and regarded workers in the industry so I expected a clinic. They were happy to provide. I love the news that Best Friends are now in CHAOS, by the way. Great news. But yeah, I love technical shit and this was technical shit. Matt Hardy was at ringside, adding a bit of side drama to things. Strong work and a fantastic way to get us started.

No, seriously. What an awesome way to start the episode.

They run down the card for us, and I have to say that I think they've overloaded this one. I fear some of the matches might suffer for it, but I could be wrong. Sometimes, jam packed things can be amazing.

Catch me on the media call tomorrow, by the way. I'm not sure why I'm being given this chance, but I appreciate it. I guess I haven't upset too many folks with this site. Good to know.

Time for Inner Circle/ATT drama. During the Jericho tunes, ATT attacked and beat down Y2J and crew and then cut a decent promo spot. Honestly, I prefer this to what I expected the segment would be.

Women's trios match time! We go PIP after a few minutes and I'm reminded that Golden Coral is still a thing. Why? Haven't those people that actually go there died already? Female Shibata shined bright in this one. Some good seed droppers, building to some of the big matches we have on the horizon. Thunder's dive was a sick thud. Conti, like I said, rocked. The entire thing was good.

Kris and Riho was promoted next with a decent package.

Jungle Boy's out next, after a commercial. Caster is out with a rap, leading out AB. JR is stuck in the 80's. I should ask TK if he knows what hair products Jungle uses. This also goes PIP, for those keeping track. Moving past my ADHD, let me just say that this surpassed expectations. I know both are strong performers, but I still wasn't sure what we'd get. It was pretty good. Bowens has been tapped out two times in a row. Borderline great.

Fish beat down Jungle Boy after the bell. Christian and Luchasaurus ran him off. Undisputed ERA should be revived as a section of The Elite.

A Page package runs. The dude has been the sneaky main character of AEW the entire time and this angle has been masterfully ran as a perfect slowburn. I hope he gets a very long run.

SuperKliq is backstage. Cole introduced Fish to the Bucks.

A package reminding us of the awesome Kingston/Punk build ran. That write-up Eddie did was amazing.

Yuta time. He's gonna get crushed. He was crushed. Taylor should have tossed in the towel. Check that one out to see a dead body. Some HFO drama with the Best Friends followed. CHAOS vs HFO? Not anywhere close to what I had wanted, but it seems possible right about now that we might be getting that.

We go backstage and see Punk and Kingston being held apart. Nice. This episode has a real energy about it.

Lio Rush and Dante Martin debut as a team next. Does Lio turn here or do they stick together for a bit? This one should be pretty fun. We started with crisp, brisk tech stuff between Dante and Lee and it fucking rocked. I want The Foundation in AEW. Lio and Sydal was a fun showcase, too. We went PIP and then actually cut to full commercial for a bit during this one. Martin should absolutely be a main eventer in a few years. We're far closer to a collapse than most are willing to admit, though. That's too dark for this post, my bad. Lio took a stiff bump when we returned, but I think we will avoid another early retirement. I like Lio and the dude used to chat in my group back in the day, but he's Kid Lykos on the western world. This got a lot of time, but it was really fucking good so it's fine. Fantastic, really. I wish DM had a better finish, though. I still consider it too average for a dude this good.

A package building Bryan and Miro's match, with a badass promo from the latter, aired next.

Commercial time. Guardians looks good. The Avengers game was such a waste of potential, but I'll check this one out soon.

Dax is out with Tully. The dude is actually a great worker (and a massive troll by the way) so this could be fun. PAC could easily be a frequent main eventer and I hope we get that again some day. I'd be just as happy if he could get another run in DG soon, because I fucking loved his last run there. A lot of technical stuff has been on display tonight, which is simply awesome to see.

PIP after we got a touch of color. Apparently there's a four-day Harry Potter game show tournament coming up. The TERF can kiss my ass. She's seemingly tried so hard to kill her franchise off with her bullshit and constant attempts to retcon shit. The series is easy to unravel from a logic stance, too. I still have fond attachments. I played with club Ravenclaw at Texas A&M for their Quidditch team, for fucks sake. This series still seems a bit weird to me.

Anyway, back from commercial and we have a super-brainbuster. Sincerely, this overdelivered. What a great episode this is. The match of dudes with three letter names had a good ebb and flow and served as another example of how rising seas are good for all boats, or however the hell that old expression goes.

Real quick, in regards to the Kingston article that's been going around, but depression is knowing your need to drop weight but being unable to do it. Knowing you need to change things but being unable to do anything about it. Knowing that things aren't so bad, while the demons in your head scream that they are. I've been a big fan since seeing the dude's Grand Championship promo and I found that his self-reflective essay was a thing of beauty. If you need help, shoot me a message or something. Don't let it be a wall that crushes you out of existence.

After the battle between Dax and PAC that was somehow the best thing of the night, fucking chaos broke out. It was entertaining.

They teased Rampage and Full Gear next.

We have only a tiny bit of time left. They made time to air an MJF/Darby package, though. PAC and Cody is announced as facing Black and Andrade at the PPV.

The Elite and Dark Order are shown as being banned from the arena for the contact signing show closer.

Kenny's promo was enjoyable. Omega is better on the mic, in my opinion, than many give him credit for. To each their own, though. Page referenced Kota during this in a nice little shot. I dug the intensity here. I must say, again, that this slow burn has been so fucking awesome to watch since day one of AEW. Before Dynamite even aired for the first time.

Omega and Page shook hands and Donny C, who was dressed as a cameraman, attacked Adam from behind. Kenny used Cowboy's blood to sign the contract. A strong way to cap the episode, for sure.

So, let me take a step back and a few breaths here.

This installment of Dynamite was two-hours of top shelf wrestling and well placed, and executed, drama via packages and segments. There was a strong energy from the opening seconds and it flowed in and out of every second, leaving us with a sincerely awesome episode. I strongly recommend fans check this episode out and thank me later.

Have fun, and thanks for reading!