Yo, Tony: A Series of Questions for Tony Khan 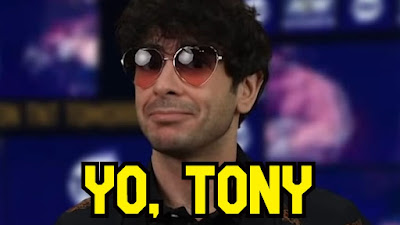 The latest AEW media call that has a lot of the other sites posting clickbait today, and for the next few days, took place a few hours ago. I know the big ones will be TK's response to the women's show question and the way he covered the relationship he has with New Japan.

I was one of many flies on the wall, listening to Tony give pretty long responses to each question in his own way. He showed a lot of passion. Someone today told me that he's Meltzer if Meltzer had a rich dad, and I agree with that take pretty well. He reminded me a lot today of Chuck Norris, actually. I met Chuck in College Station several years ago, when I had more hair and less body fat, at a book signing event. The line stretched far and we all waited for a very long time. It was only supposed to run until 9, or something like that, so when it got closer everyone started feeling a bit more tense. The dude actually stayed a few hours late just to see everyone. I had a very nice chat with the man. All to sign a book of family friendly Chuck Norris jokes.

Did Tony stay well past the advertised time, answering every question? No. Did he give just about everyone well thought out responses and a lot to write about? Yeah, for the most part I'd say he did.

Alas, I've hinted at an issue, though. I could write about everything said during the call, but others have already been working on that today and I like to think that RW+B is an alternative style site to my contemporaries.

So, to get to the point, I was never picked off of that wall, remaining just a house fly. I had a series of questions that I had thought of the night before, especially after chats with Eric Mutter and Steve Stone. I don't sincerely expect TK to read this, let alone reply to it. I am also aware that I have criticized the dude, fairly in my mind, yet sound a bit like a kiss ass right now. It's not intentional, and I believe those criticisms are proof that I'm just trying to be sincere here.

Anyway, here's some questions. I had narrowed it down to the first one here, but why not just drop all of the others with it.

If you do read this, I'd love a response in whatever format you'd prefer. I have history doing interviews, for example. Hopefully I'll at least be allowed back to the calls after these questions. I feel not enough non-softballs are thrown during those calls.

1. Has there been any consideration, or even discussion, in regards to a possible supershow style event featuring wrestlers from your partner feds? Perhaps with the All In title.

2. Is there any chance you'd comment on who all three of the wrestlers released allegedly due to behavioral issues are, as referenced by Bryan Danielson?

3. What are the top five promotions that you want to either start a relationship with or grow closer with?

4. During the lockdown section of the pandemic, was any consideration given to moving to a more bubble style system of taping shows, similar to what the NBA and ROH did, to increase safety and decrease risk or was it not a perceived option?

5. Would you support a wrestlers union if the workers approved of the idea via a vote?

6. What are your thoughts of a weekly studio style interview series on YouTube, similar to what CMLL does weekly, but with more drama. Tony Schiavone and maybe Taz would work as possible hosts, or roster members like Kingston, Starks, or MJF, perhaps?

7. Would you ever push for something like AEW Dark: UK or AEW Dark: Japan or something or would you agree that attempts to do such a thing could end up hurting those areas more than they could help and might not be worth the risk?

Fuck it, one more.

8. Is there any truth to the rumor that TNT wants women's content kept to a minimum?

So, that's my big ones right now. If you're a frequent visitor of mine and not TK, and you are still reading this, consider dropping a comment with your thoughts on these and if you have any other takes you'd like to talk about.