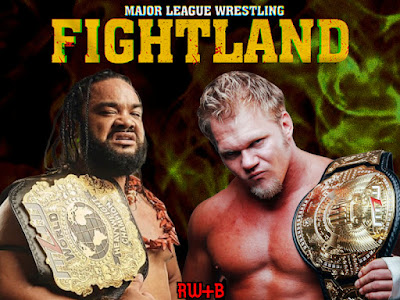 This was a two match special event, meaning that both matches were guaranteed to get good runtimes. I appreciate that. I also will admit that, while I still have many nitpicks and issues with the brand, Fusion: Alpha has been a very fun series thus far. I'll refrain from diving into those complaints here, for the record.

The first match was a spotfest that featured the legend Tajiri and some smoke and mirrors alongside the chaos. It worked for what it was and what it was is an entertaining car crash. I dig it. The title change is a bit iffy, but I like Tajiri and if they keep him largely in multiman defenses and quick crowd pleasing contests, it'll be okay. In all, a fun way to kick us off.

All of the other content on the episode was decent-good and helped the flow of the show nicely enough. Perhaps the biggest news from all of that portion is that Ospreay is coming in soon. Yes, he's stupid as fuck, but he really is one of the best workers in the game.

We close with the match MLW has been building to for a while now, as Hammerstone took on Fatu with both putting their belts on the line. I enjoyed Fatu's reign. This was predictable and depressing as a result, because I'm not big on the new champ. It doesn't matter what I think and it is what it is, in the end. The match was at least pretty damn good, fantastic really, and that is what matters most, here. It felt like a major match and served well in the role it had.

All I ever ask for is to be entertained and Fightland did exactly that. The two matches all landed very well and everything else was fine. I enjoyed it more than expected, like MLW in general the past few weeks, and think you might want to consider it yourself.