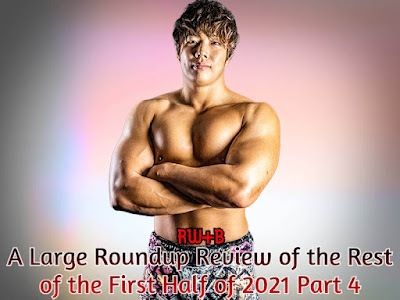 From GAEAism Decade of a Quarter Century (06/13)

With this, I conclude this ongoing series.

We start with a giant chuck of the CyberFight gig, which was a supershow featuring the Wrestle Universe brands (DDT, NOAH, TJPW).

Kongo versus Team DDT was fantastic, with Kenou refusing to accept the DDT unit antics as he acted like a grade-A dick throughout and constantly targeted Yukio which was awesome. This was booked as NOAH versus DDT and it came off very well.

A more pure version of that theme followed and Takeshita's side picked up the win over Kaito and Inamura in a MOTYC level battle. This was one of my favorite matches of the year and a pure display of what tag team wrestling should be. The future of wrestling story was a nice angle, too.

Miyu and Yuka killed it in their match, putting in for a fantastic clash in which both came off looking good. The champ retained, which was the right choice, and a slap from the challenger afterwards made it clear that it wasn't over between the two.

Jun Akiyama versus HARASHIMA for DDT's top prize was pretty damn good, and served as a nice reminder that grandpa Akiyama can still work better than a majority of folks half of his age. It also worked well as a showcase of why DDT is one of the best companies that far too many write off.

The only match I watched from the show that didn't go far and beyond recommendation levels was the main event, with Muto and Marufuji running too long and not having nearly enough going for it during that window. It felt like a chore at times, and I admittedly nearly fell asleep. I respect Muto's contributions and I am a huge fan of Marufuji. I just think Keiji's run as GHC Heavyweight Champion also was a terrible experience and the only truly good thing I can say about this is that at least he didn't retain.

Jeff Cobb was a monster, beating down Ibushi in the next match. It allowed Kota to play from underneath, showcasing a resilient fighting spirit in his desperation. As a result, both dudes came off looking great and the match itself had the right layout, pacing, and length to make it an awesome experience. I know New Japan is cold as fuck right now, but this roster remains stacked and capable and Kota versus Cobb was fire in that dark.

Okada is half-way responsible for almost every modern classic and is capable of amazing performances, made to look easy, any time he wants to have one. SHINGO is an underrated god of the art and a dude I've loved for many, many years. I am an old DG diehard, afterall. Here, we had another sign of the brilliance of the New Japan roster. The fact that this fed feels so cold right now needs to be blamed directly not on the talent, but everyone else. There is no reason New Japan shouldn't be getting constant buzz, but here we are. This match is perfect evidence, as it's an awesome battle of fighting spirit and another deserving main event.

From the big GAEAism gig, we had a trios match that had some warts but was largely fucking awesome. I wish parts had been smoother, some of the eliminations were a bit weak, and there is a weird fucking three-count botch, but god this was sick. I love the Sendai crew and them and Marvelous told a great story, there was some fun pace work, and the endstretch was amazing. Check this out.

The Tomoe battle match from All Japan was an awesome showing of the future of this company. While the format is likely to be polarizing, I enjoyed it and found this to be a fantastic contest. Kento is a god, Yuma is very good, and Jake Lee in his new role rocks. This is a great one to watch for newcomers, in my opinion.

The cage match apuesta fucking rocked. I appreciated the build up to this one, which I watched on NOAH's YouTube channel, and I walked away hoping we'll get to see another attempt at something new from the promotion sooner than later. They nailed the cage match stipulation and both dudes worked their asses off. Call it a MOTYC and make time for this if you fucked up and skipped it.

CMLL has a great roster but they also suck, so the bar is low. Keeping that in mind, I close this set with one of their best matches this year. It's a sincerely fantastic lucha battle and well worth checking out, but also a reminder that this company barely tries and the talent tend to phone shit in as a result. The oldest promotion in the world just feels so tired so often, but I applaud Titan and Negro Casas for stepping up nicely here when they didn't need to.

Thanks for reading, as always.