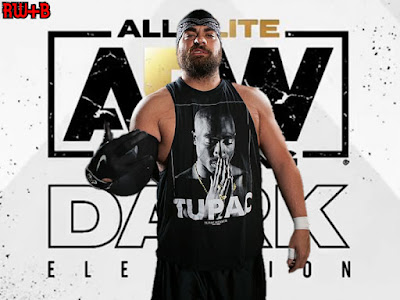 The Wingmen kicked off the episode backstage to buildup their match later in the evening. And by later, I mean the opener. Apparently Cruella died. Them and Bear Country had a decent throwaway tag and the right team won. After, JD and Cezar attacked after.

Next, Emi Sakura squashed Missa Kate in just over three minutes. When is #PencilArmy taking over???

Archer carried GPA to the ring and murdered him.

Swole vs Diamante in a Three Strikes Match is promoted for Dark, which I'll be watching/reviewing in a bit. That match looks fun on paper and the gimmick is cool.

Big Van Nyla destroyed Luck and all LL got was a stupid t-shirt.

Bowens and Griff were up next, as a bridge back to the feud that was killed thanks to a shitty rap. Expect that one to return now. This one was enjoyable and a nice show of how talented the roster is even at this level. Caster ran out, hit Griff with a chain, and gave Bowens the W. Pillman ran The Acclaimed off.

Red Velvet padded her record next. She has a lot of potential but also tries a tad too hard at times in my estimation. It causes minor issues and is creating a perception with the more negative parts of the IWC, which is most of it.

Dark Order, backstage. Uno points out a member is missing, Alex, agrees that it's his fault, and says that he wants anyone that has an issue with him to say something. Five said something. I'm enjoying this playout. Uno is trying to be a leader of a group that said they don't want a leader. I enjoy the way they're using backstage segments on this show.

Up next is the contest I was excited for the most from the card. My expectations were not met to be honest. Both are far better than was on display, but they did well for the time they were given. While solid, it's admittedly hard not to be slightly disappointed with this one solely because they are capable of far, far better. Dante continues to try out various finishers.

Skye Blue earning a shot to be in the Casino Battle Royale and then getting eliminated the way that she was is admittedly a weird flex. I'm not saying she should have been in for a long time, but that still came off a tad weird. Here, she faced off with Riho. The person with a bigger controversial showing at All Out. I love Riho being back. The fans that didn't are clearly not like me in the slightest. Blue vs Pink was a decent semi but was still skippable like the rest of the show thusfar.

We closed with Mox, Kingston, and Darby, with Sting, against Chaos Project and RSP. The fact that Ricky is in a main event match for the second biggest wrestling company in the states is cool, even if it's on a secondary show. I like the two trios, too. We're supposed to be getting six-man belts soon and then women's tag belts. For a main event, it worked decently. Like a lot of the episode, it was perhaps a touch below expectations, though.

Elevation this week had the expected records padding matches and a couple of acceptable throwaways but nothing hit a level of being sincerely good. It was weaker than some of the more recent installments that I've seen but was still an okay laundry load length episode of wrestling if you set your expectations to zero. Elevation is both what NXT was supposed to be and WCW Saturday Night all in one and even a weak edition like this still felt like it had purpose.

Note that I'm likely going to start doing select matches from Elevation moving forward again instead of full episode reviews due to the fact that time is a bitch. Dark still has me hooked.

Only recommended for diehards of the product.