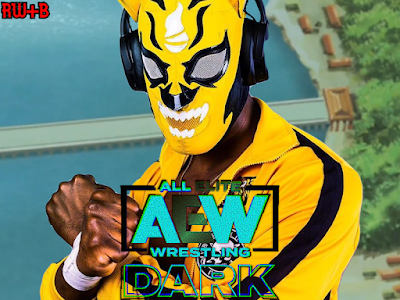 4.The Acclaimed vs Anthony, Dean NR

Archer chasing a dude to the ring to kick us off was pretty fun. A squash, of course.

Bunny got one of her own. I'm excited to see her and Ford's team especially with the new tag belts on the horizon.

5, with Silver and 10, took on Evil Uno, out with Colt and Stu. It stated with a flashpin attempt from Uno after a handshake attempt. Tension teases throughout with the unit-mates were seen as the fans chanted, "please don't fight" at them. While not recommendable on match quality alone, it's still worth seeing for diehard fans or just Dark Order fans that might want to see the angle.

Caster came out next and had a prewritten rap. Funny shit, honestly. It was the right way to re-debut the dude and I hope his alleged sensitivity training went well. They then squashed a dude with an STI and another with a small dick. It came off pretty damn well. A reminder, but I've seen someone recently say they gave up on AEW after that controversial rap but then saw that they still watch WWE. Don't be THAT dude.

Janela and Lee Fuckin' Moriarty worked the next one and I am very happy that they were given time to make it into something. Moriarty is one of the top three unsigned dudes in the United States scene right now, a mistake that won't continue too much longer as he has interest from at least four promotions last I heard, and the dude got to show off a bit here on Dark. Pretty good stuff and worth checking out.

Imagine a Foundation style unit with Bryan, Moriarty, and Garcia.

Kiss came out and attacked Joey after as payback.

Next up, Dark Order's Stu Grayson and Colt Cabana in action. Extended squash. Dark Order looked more in-synch here which painted a contrasting picture against what happened earlier in the night. For the record, I had heard two possibilities. One saw Dark Order splitting into two parts, creating a face side and a heel side. The heel side to be closer to the original vision of the unit. The other possibility was to have Page come back and get them all back on good terms when he returns.

Last up, Diamante and Big Swole worked a Three Strikes match. I dig the gimmick. The first fall, requiring a pinfall victory, ended with D getting a cheap point. She was rocked a bit and seemingly thrown off a tad throughout the rest of the match. The submission portion was decent and ended with a predictable tie-up. Diamante stumbled a bit getting a kendo stick and then had it used against her in the final fall. I appreciated the physicality here and, even if the flow was a bit off. In all, it was a touch under what I had expected while still being a good contest. I hope we get more angles with Diamante and Big Swole versus others soon and would even be cool with one more match between the two beforehand.

This week's Dark was pure fun once again and a nice mixed-bag of content that all worked well enough together as a package. If you aren't watching Dark, I honestly think that you're missing out on a very fun experience. Give it a look.