Return to Lucha, Looking at the Upcoming Azteca Underground Tapings 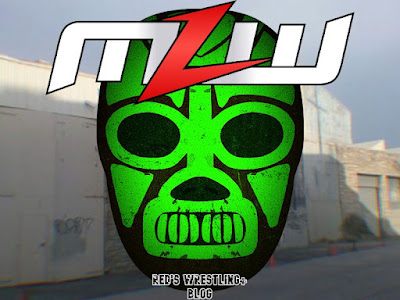 MLW's Lucha Underground knockoff is set to debut soon and they are seemingly setting themselves up for a chance that this project is actually worth watching. I've been blunt in the past that I find most things involving MLW to sound good on paper but boring in execution. That stance is part of why Court, a dude I find to be very thin skinned, has me blocked on Twitter. I am a very huge fan of Lucha Underground, but MLW hasn't earned enough good will from me that I'm truly excited, either way.
How the fuck are they going to even explain Dario being alive and openly speaking, by the way? I guess the new show is just a spiritual sequel instead of a continuation so it doesn't matter. Almost an alternate universe kind of thing, likely focused far more on spotfest lucha insanity instead of featuring many scifi elements, if any at all. I know Konnan is a big figure head of the project which suggests a high chance that this becomes a very entertaining "what if" style series, considering he was very vocal with his opinions on Lucha Underground not matching what he thought it should have been.
So, they're taping in Mexico on the 11th of September, utilizing a partnership with the inconsistent The Crash promotion. I guess that means Konnan is back in bed with them. He's very inconsistent with his relationships and drama does admittedly follow him around a lot. I still respect the fuck out of him. I'm honestly excited that we're finally essentially getting The Crash material recorded by proxy, because they are in many ways the PWG of Mexico in my opinion. There are notably fears that the tapings are delayed, relocated, or cancelled due to the area set for all of this still having bad issues with COVID-19 so I think that possibility should be made clear and not brushed aside.
Note that MLW is also taping material in Texas that same day.
With Fusion Alpha set to debut soon as a bridge to the next chapter of Major League Wrestling, it seems rather obvious that this is indeed setting up essentially a brand split that will feature select crossover moments. I expect Dario, or whatever they're calling him right now to avoid getting too involved in that AAA lawsuit, to work the Dallas gig while also taping backstage material for Azteca. I could be wrong. It just makes the most sense to me unless they really want the image of him in the ring in Mexico pumping up the crowd.
The biggest question mark for me is Andrade being advertised by The Crash for a future gig. It could easily be a random show but I'd love to see this entire thing be a set up for the next forbidden door opening. Maybe it could get MLW to step up more often. I just think the more promotions working with each other, the better.
All I know is that I want to be excited for this Lucha Underground adjacent show, despite everything in me screaming the opposite. I'm going to remain cautiously optimistic.
Fingers crossed.
Wrestling