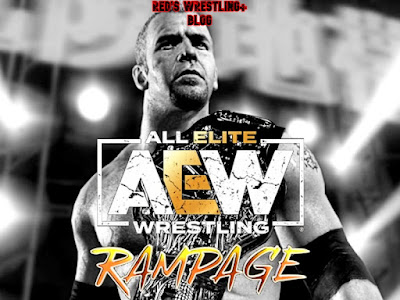 EPISODE CARD
1.Impact World Heavyweight Title: Omega(c) vs Christian
2.AEW TNT Title: Miro(c) vs Fuego del Sol
3.AEW Women's Title: Baker(c) vs Red Velvet
Thoughts & Predictions
The debut installment of Rampage features a rather interesting card, doesn't it? The fact that they are giving three championship defenses away is likely enough for them to feel it's a worthwhile way to launch the new series, but it still feels like we might be having something more occurring than just what's announced.
Up first, we have Christian challenging for the Impact top prize. There is a lot of history here and it's worth noting that Captain Charisma's run in TNA years ago is still considered by many to be the best thing that Cage has been involved in. It's being promoted as the first of two matches, with a second taking place at All Out for the AEW World Heavyweight Championship. I am unsure the plan here, but I have reason to believe that the All Out match will not be happening. I am also of the impression that no title change will be taking place here, but cannot rule it out. It'd be a big mistake since there is far more to gain for Impact if they have someone like Bey or Alexander dethrone Kenny.
We'll see.
I like Impact but they don't always do the thing that makes the most sense. I will go ahead and say that tonight, Kenny wins. The episode will end with The Elite beating the fuck out of him to write him off but a big name makes the save before they can do more, like "ending his career".
For the TNT Championship contest, I had an awesome idea proposed to me by a bud of mine. The story involving Fuego has been interesting, right? Well, have his buddy Sammy Guevara work the match under the mask and have him win the championship, shocking everyone, and unmasking after for a big pop. Either do that or have Miro just fucking murder Fuego for a few minutes and keep his great roll moving along. I'm expecting the latter and am only okay with a change here if it is related to the former.
The main event for the debut sees Baker defending her gold against Red Velvet. Admittedly it's not a huge marquee match, but Baker is super over right now and is in her hometown. It'll be an okay match with a predictable finish. The arrival of Ruby Soho after could work for a fun show closing pop, but I think her debut should be saved for All Out as the surprise entrant in the battle royale.
Rampage is an hour. The Impact match likely gets about fifteen minutes. Miro's will be under five. The main event with Baker is likely under ten. That, even with entrances, leaves a lot of room. I expect Rampage to be a condensed version of the excitement that Dynamite provides. Tony loves surprises and this is a special episode. It feels like we should expect something here and I don't think we'll be getting 50/50 treatment with the promos and wrestling being equal.
Do you vehemently disagree or am I lined up pretty well with your own expectations? Let me know on Twitter or whatever and thanks for reading.
Wrestling