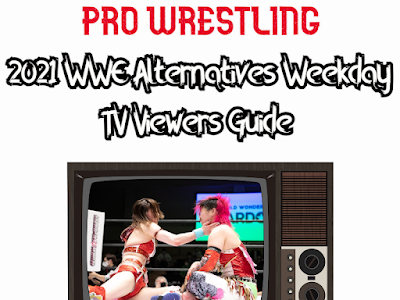 Ladies, gentlemen, and nonbinaries, I am here to present you with what I am calling the WWE Alternatives Weekday TV Viewers Guide. If you're tired of watching Vince McMahon shove fans collectively into a universe where everything has a slight scent of horse shit, you're in the right fucking place.

Ring of Honor airs every Monday on Fite and is one of the most prestigious American wrestling promotions of all time. While they admittedly hit a low a while back, I personally think they've been building back nicely and are now one of the most consistently entertaining wrestling sources in the world. Their weekly show in particular, which was changed substantially last year and has evolved a bit since, is an easy recommendation.

Honestly, I have to suggest AEW Dark for this day. I know many might prefer NWA Powerrr, which I could make strong arguments for to disenfranchised WWE marks, but I personally find this to be the better option. Powerrr has a very fun old school approach and a name that sounds like it should be said by a pirate. Dark is a developmental show for AEW that is mostly squashes, some trials, and maybe something that is overflow from or something that is heading for their flagship, Dynamite. It also features Taz and Excalibur on commentary and is a loose, fun experience. The only knock I have for it is that the runtimes vary greatly week to week. The show very rarely has title matches so I'll hold off on listen current champions. Watch it on YouTube.

So, fuck the perceived rules that you've likely thought are set in place by the past two days. This time, I am recommending two shows.

We are STARDOM!! is a thirty-minute thrill ride that airs early in the morning here in America, unless you're one of those people that actually wake up early and start their days all productive or whatever. It uses material taken from STARDOM shows about a month or so prior to airing and occasionally has things clipped down a tad. I basically always find myself left content but also wanting more after each release and consider it to be a must-see program. Watch We are STARDOM!! on YouTube.

I also have to strongly recommend AEW Dynamite. The show is a modernized attitude era series and each episode is packed with excitement. I consider it to be the best weekly program right now, beating We are STARDOM!! thanks to their strong run the last several weeks. It's the ultimate pro wrestling variety show and the first promotion that has been able to step up this big on WWE since the WCW days. Watch it on TNT or, if you're in certain parts of the world (or use a VPN), you can watch on Fite with a cheap subscription.

IMPACT! Wrestling, formerly TNA, has a very bad reputation with fans and scared away most years ago. It's been an uphill battle for them to win back any good grace that folks were willing to spare, but I personally think they've done very well to keep me interested. That said, I didn't hate the "bad years" of TNA as much a some so take that as you'd like it. Thanks to their relationship right now with AEW, New Japan, NWA, and AAA, IMPACT! has been able to provide for a show that both does well promoting their own content while also feeling like a companion show to anyone that is a fan of those other promotions. Their roster is packed with talent and the show works well when you forget whatever hesitations you might have and just give it a true change. Watch it at their site.

I'm once again breaking the nonexistent rule here and suggesting fans also consider NJPW on Roku. I find the presentation a bit lacking in polish, something I wish I could be a part of fixing. It also airs content about a year behind the current product. New Japan also happens to arguably be at their worst state in over a decade. I say those negatives so that I can point out that each under-an-hour long episodes is still well worth watching. Even this New Japan is still better than almost anything else in the game.

The first episode premiers the week that I wrote this, but AEW Rampage on TNT promises to be a must-see hour of television. They are apparently treating this like an extra hour of Dynamite without making the mistake of adding a third hour on Wednesdays, instead of doing what WCW did with Thunder. The show can also be seen with an AEW Plus subscription. Check above for a list of champions.