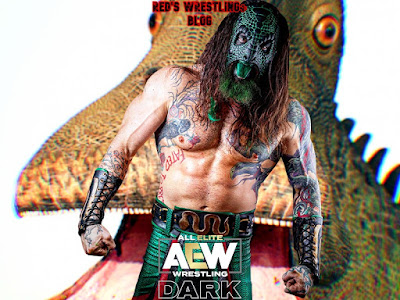 EVENT CARD
Thoughts:
On Dynamite, they aired a graphic during the Christian match promoting a special Dark on Friday. I didn't hear the commentary team say anything about it. Apparently they did, according to one person. I do know that I saw no mention of it online at all and even a bud of mine who watches religiously thought I must have been stoned or something.
Today, they announced it is happening. I actually went and watched back and took a screenshot to prove that I'm not crazy last night. A small part of me thought I mind have indeed lost my mind, to be fair. I mean, shit happens.
Anyway, in honor of AEW making me feel insane, lets predict what happens on this special episode. I only have a moment so we'll keep it short, though. I have to prep for the Syracuse Mets game tonight.
Lance Archer will get his squash on.
The Lucha Bros will win to pad their records. Extended squash stuff. Could be fun for what it is. I mean, these brothers are always fun as fuck.
Kazarian and Peter are working a match. Kaz will take out his frustrations on Avalon and get the W. It'll be okay.
Kris is being propped up. Will get a squash of her own, which is a big part of what Dark is about; trials and padding records.
Julia will win one of the more competitive matches of the night. She's still green as is her opponent, but Hart's being set up for bigger things later.
Ethan Page and Baron Black. This could be the best match of the night, honestly. Give them a bit of time and we could have a good one. Page wins.
Abadon will scare some kiddos. Will win a match. Will continue to be an enigma. Squash, most likely.
Honestly, the real MOTN should be the one featuring Dante and the Sydal Brothers as they take on, and beat, the trio of Vary, Bengston, and Frye. Again I say, AEW needs six-man belts!
Orange will defeat Jora. The former will get some of his bigger spots in quick.
The Factory's Solo and Comoroto are doing decently. They will likely beat Billy and son here. I have no expectations for this but it could be okay filler stuff.
The last match sees Luchasaurus and Jungle Boy in action. They'll be squashing D3 and Ryzin. Again, it'll be okay for what it is.
Dark really is a filler show but it's entertaining when you accept it as such. The commentary team is one of the best in the game, too. It's fun and chill and I enjoyed watching the episode a few days ago. I'll enjoy this one less, I'm sure, but it should be enjoyable enough. The Mets game runs late tonight so don't expect a live review.
Feel free to call me out for being wrong about anything, should that happen, tonight or whenever.
Wrestling