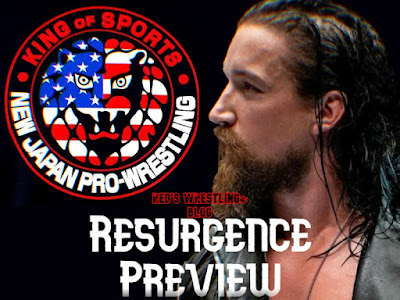 I just posted a preview of tonight's TripleMania and I have a moment so here's one for New Japan's big US show, too. Consider watching both if possible.

It will stream on FITE for $19.99 HERE and at New Japan's streaming service, which costs about half of that and features all of the older content. The show is at 11pm eastern and is airing out of LA.

Coughlin is in the middle of a trial series in the opener, which could be a short-but-solid outing. A victory over Fredericks here would be the next step in his progression and I am leaning towards that being the result.

The six-man will be a showcase match and one that features an interesting mixture of talents. I'd guess that Romero's crew will get the W here but you could flip a coin and likely be as right as me.

Dickinson and Lawlor, the latter happening to be the STRONG Champion, are having issues. Lio Rush has challenged Lawlor for a title shot soon. Those angles will play the biggest parts here. Expect some crisp ass wrestling here and a bit of dirty behavior. The face side will likely win this one.

Juice and Finlay are dealing with Bullet Club drama. Juice will be facing Hikuleo in a match that will be okay but skippable. I know the BizCliz member has been getting more coverage lately, but I just can't see him winning this.

Ishii and Moose will face off in singles action tonight and there's a good chance it's the MOTN. Ishii is one of the best wrestlers ever and Moose has evolved a lot lately. The size dynamic should add nicely to the recipe and the entire thing is oozing in potential. I saw Moose wins, because the dude is rising while New Japan has rarely cared about Ishii enough that they've felt they needed to protect him.

Moxley and a surprise partner, my money being on Sami Callihan, keep the drama going with Anderson and Gallows. It'll be a brawl based battle but has a lot of potential to admittedly be the weakest thing on the card overall. Mox and ??? are my pick.

Jay White defends the NEVER strap against Finlay in the semi spot. The two have a long history together, going back to their young lion days. Jay has essentially dominated the loose feud until recently. White has responded to his L with an ongoing angle that has bled over onto IMPACT, giving that show one of it's best current storylines. I don't see a title change, but I do think this one will be better than some are expecting.

Tonight's main event is interesting for sure. Archer, having just dethroned Mox on AEW, will defend against Tanahashi of all people. Hiroshi is still one hell of a worker despite being so deep into his career and Lance has a tendency, increasingly, to overdeliver when competing. I don't expect Archer to fail here, instead expecting this to be meant as another big victory as they build up the monster as a star in the US portion of their expansion.

That's my quick takes on everything. Thanks for reading and, for those watching, enjoy the show.