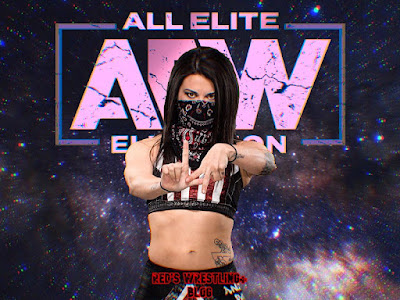 I realized this morning that AEW books Dynamite, and now Rampage, similar to anime arcs and Dark and Elevation are filler episodes. Sometimes filler can be fun, y'all.

Also, I fucked up my previews last night so God knows I'll fuck up here, too. It's part of the ride.

Kiera Hogan, fresh off of leaving Impact, will face Hikaru Shida. Shida is a gatekeeper for the division in a way so I feel this is a trail match to see if the brass think Kiera fits well with the women's side of the roster. Shida will win but how well the match goes and how much time it gets should be telling.

The Lucha Bros and TH2 face off for what I believe is the first time ever, including their time in AAA. I'm expecting a spotfest for about ten minutes. It makes the most sense in my mind to have Penta and Fenix take the W and I am pretty sure that's the plan. Not looking at spoilers on accident is harder than it might sound, by the way.

Thunder Rosa will pad her resume against Ray Lyn as they positions her for battle against Baker soon. Extended squash at most.

Archer will eat a mother fucker on YouTube and AEW will get a strike against for the graphic nature of it all.

Serpentico and Sammy is an interesting mash up, isn't it? Sammy will win, but I'm expecting about seven minutes of action. It'll likely feel like a good lightning match in CMLL minus the clock counting down.

2.0 will be getting a victory on Elevation for sure to help...elevate them. Clearly, they are being set to be a big factor of the division,

Bowens and PAC is interesting because it features Bowens on his own. Max is reportedly on ice and I've had some suggest to me that he's either doing sensitivity training or that he's reacted very poorly to TK and is lashing out. Who fucking knows. In the mean time, they've scrubbed the duo from the rankings, ended the story with Varsity Blonds, and it looks like Bowens is going to be working solo for now. A match with PAC feels noteworthy, even if it's pretty obvious who will win.

I'm expecting Starks to come out for commentary, Cage to destroy a man's soul, and then a stare down between Cage, in the ring, and Ricky, at the booth. The outcome is certain even if that angle addition is not.

I have no idea who's winning the Julia Hart/Diamante match. Hart appears to be moving past her part of eating pins every time and I think she has a lot of potential. She reminds me a lot of Bliss when she started. I also really don't want Diamante to fall here and feel she's still positioned above Julia, as she should be for now. I'll say Diamante wins but the opposite should be back page news.

Dark Order's 5 and The Bad Boy work a singles match after Joey's turn on Kiss. The Dark Order have been doing fairly well lately, but it feels like Janela is being meant for something a tad bigger than whatever 5 will be set for anytime soon. This could be a sleeper for MOTN, though the TH2 and Sammy matches are the favorites for that honor. The only thing I know for sure is that Joey Janela is a dick again. In wrestling. In real life, well...

The last match that AEW announced will be Jade squashing Kate Arquette, the latter being a fake relative to Dave.

This is far from must-see, but if you want a loose hour of wrestling and a few solid matches alongside seeing some jobbers get their souls ripped from their bodies like it's the old days, give it a try.