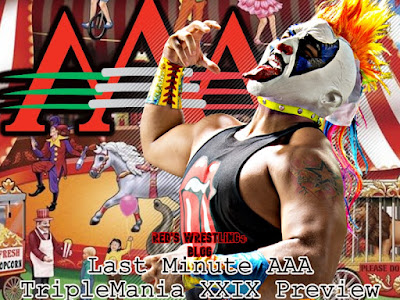 My kiddos are sick right now so I had a set back getting this done. Better late than never? I will say, if you are new here and end up disliking my writing style, a super comprehensive preview was written up by the best writer in all of lucha libre and you can find that HERE. With luck, you'll just read both.

To keep things short, AAA is dealing with lawsuit drama related to Lucha Underground. As a result, even mentioning that they still exist in the United States has been rare, even by their own partners. The company has largely blocked themselves out from the market, likely setting themselves back when they were finally seemingly starting to get a nice rise going here and, as a result, you'll have to either use a VPN set for Mexico or check out a secondary streamer to consume this.

It starts around 9pm eastern likely in front of around 5,000 fans. I warn you that Alberto Del Rio likely will appear alongside Andrade. More on that later, but I figured I should mention it early on.

HERE'S the link to the AAA Facebook. They are streaming it there. Again, use a VPN to watch.

HERE'S an alternative stream, being hosted by the writer of the link I attached at the top of this article.

So, first match of note is the yearly battle royal. This time it's sponsored by a car parts brand so maybe we'll see some sick spots involving cars or something. It's lucha libre, who fucking knows what'll happen! I'm never huge on Royal Rumble style matches and these always feel like AAA just trying to keep folks on the roster happy to get on the card since they didn't have something better for them to do. It will likely be significant in that you'll get a few surprises, the biggest likely being the debut of the NGD trio that just left CMLL days ago. I have no idea who's going to win here.

Next, even more uncertainty. a Marvel Comics tie in match is set and all we know is that it'll feature wrestlers that are unannounced working a match dressed as villains and heroes. It'll be an okay novelty but there's little else to say here on the match itself so lets move along.

Faby Apache and Deonna are scheduled to face off with both of their prizes on the line. Faby can be great and Deonna is pretty decent against the right opponent. This should be entertaining even though the tiny bit of build to it has been whatever the opposite of must-see is. It'll be good if Purrazzo changes things up just a tad but regardless I am pretty sure she takes the W here. Impact seems set to run her as a belt collector and this is the next chapter.

Penta and Fenix are finally back and the company tag belts are on the line tonight, and it's one featuring a touch of mystery. Taurus has a partner and the only hint I've seen is that it's someone with Ring of Honor ties. Bandido seems most likely. Adding really anyone that possibly fits that clue into this one is still just a technicality, though. See, this is very predictable in two ways. First, this is going to be a balls-to-the-wall spotfest. Second, the belts won't change hands but also won't be seen on AEW television because that's how 2021 is.

Another mystery is who will be the extra two men teaming with Puma King tonight as La Empresa, the latest of many, many, many invasion groups AAA has attempted. Most of these angles start and then end abruptly like that weird wet dream we all have about kaijus. Diamante Azul seems super likely to fit one of the spots and will mesh well with the gang. I have no idea for sure who the other would be. If AAA is willing to shift things around and it wouldn't create too much drama, the best option is to have one of the NGD win the Copa and have Puma's other partners be Forastero and Cuatrero, presuming Sanson gets the battle royal nod. La Empresa winning makes the most sense to me here but the only thing I'm certain of is that Pagano is going to try to kill himself.

Omega lost last night likely in large part because AEW wanted the first L Kenny took in a long ass time to happen in their own ring. Andrade is likely bringing ADR with him because they are seemingly pals and because ADR has a lot of rich pals. Alberto likely sees this as a way to get himself back over by being attached to one of Mexico's biggest stars. It'll be a stain on the match if it happens and I have a feeling we could get some drama before, during, and/or after because of Kenny and TK not wanting to be associated. They likely aren't aware of a recent Andrade match if that's the case or they just understand how much bigger a stage TripleMania is. Not big enough to at least mention, of course. This SHOULD be an amazing contest.

Psycho Clown and Rey Escorpion will be main eventing with this year's big apuesta for the company. I honestly think this is the match we're getting because apuestas can cost a lot of money and best I can tell AAA makes most of their revenue through attendance. They've had issues in that department, of course. I honestly think them doing well tonight is a big deal because of that very reason. Anyway, Psycho is super charismatic and Escorpion can deliver the goods so this should be fun for sure and could even be one of the year's biggest must-see matches out of Mexico. Don't expect a mask to be removed, outside of cheap heat rips and pull spots. If you're deep into lucha libre politics, you can expect something fun at the expense of Ultimo Guerrero in this one but many will likely miss it completely.

I hope this helps some of y'all. Thanks for reading.