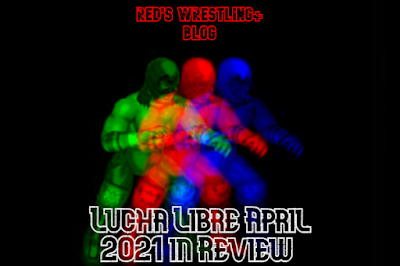 The first pull saw Silver Star and Komander put in for a match that was far better than I had expected, especially considering how rarely I've checked these dudes out. It very much felt like a big CMLL match, in a good way, and I applaud the work and pace of this one.

Over to IWRG next. This company has been one of the worst behaved in response to COVID, by the way. Anyway, this tag was bloody like an 80's b-level horror flick and a great, menacing battle. Great stuff if you enjoy bloodbaths.

We move to MEXA for numbero tres. The finish sucked. The rest was about as awesome as a lot of bigger Villano III Jr matches have been. The kid is really good at what he does. Toxin too, to be honest. If you want a spectacle, this one is well worth the watch. A bigger one seems set up.

Next, Ricky Goddamn Marvin against...Villano III Jr. from Lucha Memes. The ropes were fucked so they just beat the shit out of each other. These two are so fucking great. If you like seeing stiff lucha, this one was worth seeing.

Apparently, keeping with the theme, we have another great match to follow that one. While nothing here so far has bridged into making my must-see recommendations list, they've all been worth a watch if you have some spare time and enjoy the style. This six-man was a wild spotfest that took a rather standard formula and added some extra energy to it.

Next, from the same gig, a trios lucha full of reckless insanity. I mean, shit really hit the fan here and I FUCKING LOVED EVERY GODDAMN MINUTE OF IT. Seriously, this was a car crash in the best and worst ways and an absolute MUST-SEE. Money was thrown in after.

The show's main event featured a dude I've seen at a show in either Houston or Katy. There was a lot of standard three-way tropes and Blue Demon Jr got beat down a lot. So, that's something. IWRG is both a fucking trainwreck and a car crash circus that you can't ignore. It makes you feel like it's the 90's for some reason. Like, all of the sudden everything has a new Xtreme version being advertised on Fox. There's weird S symbols being drawn everywhere. Everyone is talking about how Manson took out a rib so that he could get himself off orally. This match was fantastic as much as it was a dumpster fire. Worth seeing for that description alone, right?

To paraphrase a bud of mine, "IWRG feels like a prison fight because IWRG is a prison."

Fresero died half way through. Was beat up further because of it. That must have put this shit over, right? Love and hate are so close to each other, folks.

Admittedly the finish sucked. I'll stick to 3.75 here, I guess. Hard one to rate.

A trios lucha first and it was a full out arena brawl. Espectro broke a toe creating a short stop to most things. It still rocked. It was a better version of the previous match, really. The finish sucked, even. Fantastic, regardless.

The last one felt like something Double J would have booked in TNA. Fresero was beaten up a lot this month. They made it work. Pure violence. Just...yeah, pure fucking violence. Even the finish wasn't trash.

Needless to say, I had a lot of fun with this set. Check out anything that sounds interesting and thanks for reading.