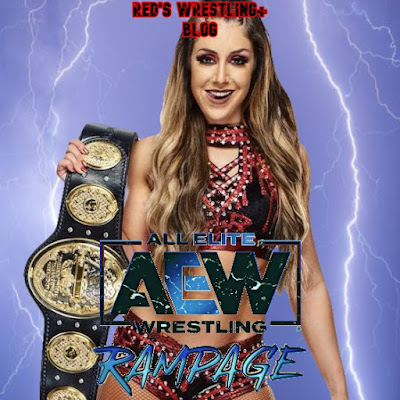 I am a far bigger fan of one hour formats versus two and more, so Rampage instantly had my attention when it was announced. I was hopeful that it would essentially be the Dynamite tone jammed into an hour and basically that's exactly what it was.

Up first, Christian and Omega killed it to kick off the episode. While I was hopeful for a great contest, this honestly exceeded my expectations completely. I'm not sure if Kenny is dropping his extra belts because of his lingering injuries or not, but I will admit the change here feels like a misstep and sends the wrong message.

On IMPACT! shows, Kenny had dethroned Swann, beat Moose, and then defeated Sami in a hardcore match. It feels like a mistake to have an AEW signed dude then come and beat him with only a few days of build when you could have instead put over Alexander, Bey, or Ace Austin from the actual promotion that the belt represents and help elevate them to that next level.

I'm fairly certain this was an Impact choice and it just feels like the wrong move.

The good news? Christian as champ is actually likely to be a fun experience, he's proven he's working hard as hell right now, and there's a history attached to him being the top dog in that company. It'll be okay in the end, but on the surface and in the moment I have to largely disagree with the move.

Fuego del Sol was not Sammy under a mask. They actually did the right thing here by making sure that anyone that watches live or at home that didn't know Fuego did by the time his two minute match was over.

The layout was simple but exciting and even seemingly sold some of the audience on a title change occurring. He landed multiple tornado ddt's that created some visually attractive moments before the monster eventually told him to fuck off and die.

It was too short to rate, but exciting television regardless and worth seeing.

After, Sammy and TK appeared on the stage. Guevara came down and told Fuego that he had earned his contract finally. I have no idea if Fuego was already aware that this was happening and just did such a good job selling the moment that it worked me or not, but it felt very emotional and his acting was phenomenal, if so.

Sting and Darby are being little stalkers.

Red Velvet and Baker had a pre-match, split screen interview spot with Mark Henry before the main event. Red said she was going to, "stir her ass up" and I honestly just don't think that means what she thinks it means.

Baker came out the hometown hero and won a ten-minute match against Red Velvet. It was okay and I appreciate Britt getting the chance to main event the debut of Rampage in Brittsburgh, but the quality of the match itself felt lesser than the rest of the show. Britt has developed super well into one of the biggest stars in pro wrestling, regardless of gender identity. Velvet is working on getting better. It didn't combine the right way for me. Not in this spot, at least.

After, we sadly had a moment that didn't seem to land well for a lot of fans.

Britt continued to attack Red Velvet. Her hometown fans were cheering for her victory but seemed to settle down a bit during this part. Heels are harder to cheer for, after all. Kris then ran in and leveled her. That is the next bit of set up for All Out, but the fans didn't love it. Hayter ran in for the save, assisting Britt to close things.

First, when Hayter ran in, even Excalibur fumbled over properly announcing who she was. She admittedly looked different than before, which didn't help him nor the fans. A brief slip or did he not know? Some commentators do work that way. Also, Hayter is an awesome talent but she also isn't big enough a recognizable face that it would make the segment actually work in the moment.

On the positive swing, while it felt similar to the "who are you" reaction that the Super Smash Brother debut got back in the old history book days, I also think, like that situation, that Hayter returning and aligning with the champ will be great as it progresses.

Baker should run a unit that runs roughshod over the division, making defeating her a titan's challenge to accomplish. Her mic work will be able to make it work perfectly and as long as they don't overdo interference spots, the matches will solidify it all.

So, how was Rampage overall...

Well, the first half of the episode was exhilarating television for sure. While the main event and aftermath were admittedly weaker in execution, it was still solid stuff. All together, this simply felt important and proved officially that AEW will not be treating Rampage as the B-show but, instead, as an hour long Dynamite. Seeing as Dynamite has been on a roll lately, that basically should tell you that Rampage is must-see pro wrestling television and well worth the amount of time it takes to watch it.

Oh, and one last pro comment on the debut of Rampage...

Dark and Elevation look to be getting more fixed runtimes as a result and going to a live AEW event looks like it'll typically last about three hours of official content.

If this sticks, Elevation will be about an hour long and Dark, two.

I'm cool with this, though would prefer both to be an hour, admittedly. I just appreciate what I am seeing as a move towards more consistency in general.