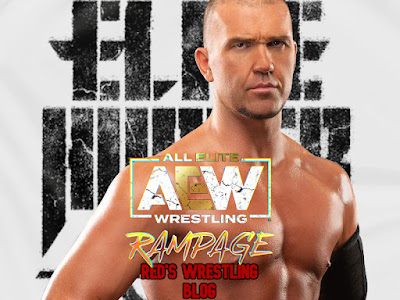 Murdoch is booked to win tonight, for those that care.

I wanted to watch this live last night, but that virus I had recently is still lingering with some hangover style assholeness. Better late than never. The anime style intro hits and the third episode, this time taped, begins. Jericho essentially tells his haters to go fuck themselves.

Up first, Jungle Boy and Luchasaurus versus Penta and Rey Fenix. The Bucks join on the ramp once more.

A side note, but I had ordered an action figure of everyone's favorite dinosaur for my kids but somehow autocorrect or a glitch changed the address on me. By the time I had realized, it was too late. Today I found Jungle Boy at Walmart here in upstate New York so I went ahead and pulled the trigger. The kiddos love this duo. I found an Aang from Avatar, too.

Back to the match, we started with a fistbump of honor. Penta is in his Joker gear again.

Giannis is in the audience. They make sure to let us know at least a thousand times on commentary. I'm never huge on celebrities taking away more than a second of time away from the wrestlers, but it's also hard to not like Giannis. I say this with it also being clear that I do not follow the personal lives of celebrities much and try to actually know very little on such things, so if he is terrible for some reason or something please don't annoy me online about it. He's an amazing performer and a top shelf athlete and that's where I end my cares on him currently.

I guess TK squealing in excitement, which was admittedly cute, isn't airing. I'm hard on the dude but I try to be fair in my criticisms and I think he's done far better than nearly anyone else in such a short amount of time in this industry.

The opener was in the perfect spot, kicking things off on a super high note. Two amazing teams going at it in a #1 contender match that built nicely and was full of action and some nice nearfall drama. What's not to like? Fantastic stuff!

That cage match is going to rock!

The Bucks attacked after until JE made the runoff save.

I really hope they do some one match episodes of Rampage. An hour is perfect for such a thing. Lucha Underground knew this. I can't see Penta and Fenix (and Luchasaurus) without thinking about and then missing that fucking show.

Since I don't do clickbait, and especially for those that aren't on Twitter, let me go ahead and drop some info here on stuff I've heard from various folk lately. They tend to be pretty accurate and frequent visitors hear should know I have a decent track record. Some of this has been mentioned in the blog and I'm expanding, some was just on Twitter, some is new.

First, I'll go ahead and mention some stuff that's going on with VKM's Traveling Circus.

Brock wasn't due back until next year. His return was reactionary. In doing so, apparently WWE has once again pissed off their networks, though. They've allegedly been mad about several things of late. Fox is said to have wanted Punk and thought they had set up a nice bridge for such a thing. As a response to what actually happened, WWE pulled the trigger on Brock and gave him a shit load of cash to put his hunting and beer drinking on pause. Now, their other network supposedly is annoyed that Becky and Brock are both on SmackDown as well as the ratings fluctuations and the way NXT is changing. Negotiations aren't too far ahead of them and things might get interesting. That interview with The Other Khan apparently might not have went over super well, either.

Braun might have stopped pricing himself out because I'm hearing he might be heading to IMPACT. He is said to be joined by Murphy and Bray. Great fits for all three is this happens. WWE is possibly trying to get Bray back.

Adam Cole is said to have been getting offers from WWE yesterday but still didn't agree to terms. Expect him on TNT very soon as it seems he didn't sell his soul.

Bryan's debut for AEW appears to have been moved up. All Out, perhaps. He, Ruby, and possibly another surprise (Cole, potentially, if he's not on TV this upcoming week) are the likely trio of showups. The ROH door is supposedly opening soon, but not likely at All Out from my understanding.

In a bit of related news, Dark is set to get the old WCW studio show treatment which I love, by the way. As long as it keeps Excalibur and Taz on commentary, it'll be a fun show that distinguishes itself more nicely from Elevation.

We looked at Punk's arrival next and the upcoming match with Darby. Good shit. Reminded me a tad of ONE packages.

Miro's music hits, Fuego del Sol crawls away from the TNT Champion. After that big moment, have they found any airtime for Fuego, even on the YouTube shows? I don't think so, but my memory can suck at times. Miro stares down at the masked man, insisting that he unmask. Kingston runs out after the man formerly known as Rusev pulls the mask off and kicks Fuego's head off. Eddie has a DMX shirt on because he's a real one. He has a mic, goes to say something, drops it and then bolts toward Miro to start brawling instead. I loved that. They throw some shots before a pull-away spot.

That's how to sell someone like me on a match. I was already sold, to be fair. That helped do so even more.

Conti danced her way out and into our hearts once again for the second match. The Bunny attacked before the bell. The commentary team talk about Tay turning down an offer to join HFO. I do not remember that but, again, my memory can be shit.

Decent match overall, admittedly a major step down from the opener, but it worked well for what it was. Bunny continues to be a decent worker and Tay one of the most likeable workers in the game. Ford came out during, setting up a distraction finish when Bunny used brass knuckles for the W.

The heels celebrated together after.

They were selling the Buy In positioned, Casino Battle Royale. Remember, AEW has treated the preshow decently and it gets more eyes than the actual shows, so it's not something to get culture war attitudes over.

On diversity, I'd love to note that AEW is doing better than most. It's a low bar. I still credit them while adding that they can do more. I'd apologize for rambling perhaps more than usual, but I'm not sorry and I hope it's making for entertaining reading material for you while you finish taking a shit, or at least pretending to so that you can avoid dealing with customers or trashbag bosses for a few minutes.

The women's division is continuing to get good build up treatment, but I'd still like more attention and more efforts made.

I'd add that, and in relation to a certain now deleted tweet, I'd like to see more skin tones in the main event scene. I thought Scorpio Sky might be getting positioned for such a spot, but they've put him in a midcard team and now aligned those two with everyone's drunk uncle as a mouth piece.

They've done well. They can do better.

Excalibur's voice sounds shot a bit as he promotes Hobbs versus Cage for Dynamite and the rest of the card. It's a good card. Darby versus Garcia for next week's Rampage is also promoted.

Kenny, Cutler, and Don are backstage to promote the main event. Want to know how to sell a match? Have the manager tell everyone that one of the participants is awful. Christian once again drops his "carnie" line again. I'm excited to see the CC/KO rematch but this match doesn't strike me as something that will turn many heads. I expect it'll be okay and feature some comedic bits, but that's about it.
Let's see.
Cutler got his ass kicked, Nakazawa tried to get involved, failed to do anything of note, and Kenny took advantage of the chaos. Brandon got in his comedy elbow drop schtick. Omega was a mischievous dick. He sacrificed his partner. Christian got the pin over the fall guy for the finish. I give it under two. Not my kind of thing and I could've done without.
The opener and the Miro/Eddie/Fuego segment are the only things this week that you have to see, but I still had a fun time and the installment went down easy regardless.

Footage of Punk, Christian, and Kaz after this taping is available HERE. It's good shit. WWE's Cult Universe tried to mock the video by saying AEW panders to the fans because they're so used to being given shit and being told to like it, and then actually doing that, that they think anyone doing otherwise must be considered a major enemy.

Rampage might be the A show now. Despite the death slot positioning, it's done great ratings two weeks in a row, was the spot for Punk's debut, and I love the runtime. One of the few things I'm not big on is the move to taping the show instead of it being live, but it's a nitpick that can be ignored as long as they handle it the right way. AEW works well as a one-hour show and I look forward to seeing what they do next with the format. As for this one, I give an Orange style thumbs up, especially for the tag eliminator and TNT Championship seed.