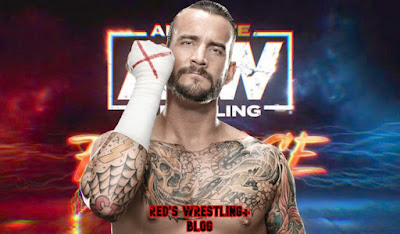 This week's Rampage takes place in Chicago and promises to be a gamechanger hour of pro wrestling.

First, lets talk about the matches.

Private Party and Jurassic Express will be a pretty fun tag match. Considering that Jungle Boy and Luchasaurus just got a title shot on Dynamite, I don't see them winning the tournament. I also don't really expect them to win here, either. I'm sure it will involve some HFO interference that causes it, but Private Party are my pick here with everyone's favorite dinosaur taking the pin.

Jade alluded to the Miro/Fuego del Sol match last week in the promotion to her match against Kiera Hogan, saying she wants to have some fun. That didn't come off as well as she might have thought, considering Miro did win but it wasn't a complete squash. So, Kiera shows a lot of heart before falling to someone that's still very green? Anyway, Hogan has been getting some trails on the YouTube shows and I guess now she gets one on Rampage. I'd prefer her winning, because she's a far better worker right now, but they are high on Jade and Hogan is still an outsider at the moment so that seems unlikely.

The main sees Garcia, another rising star but one I have a lot more faith in than Jade, taking on Moxley. This one is interesting for sure.

So, everyone knows that Punk officially becomes a member of the AEW roster tomorrow. Anyone denying that needs to reevaluate a lot of things and tomorrow I really hope they own up to their mistakes. The question is how do you debut the dude. You need to do something immediate to start the episode. Keep in mind, they'll be taping Dark before so a lot of these amped up fans are already going to have been there for about two hours. You want to combat the chances of Punk chants overtaking the show, too. So, you can either have him start the show with a pipebomp or you can allude to something later and hope it's enough.

The card itself is a bit weak considering it's the biggest crowd ever for AEW, so they are banking on Punk alone being the big deal to make fans content.

I say you go ahead and pull the bandaid off immediately and have his music hit and let him have a live mic. The matches we're getting in no way need to take up an hour so he could easily get a nice bit of time going off. How it involves Darby and possibly Sting I don't know. There is presumably a second surprise featuring either Bryan or Jay White so we'll see.

Now, back to the main event. Garcia and 2.0 have been built nicely so far. I think we'll have 2.0 get involved and the entire thing gets a bit chaotic. 2.0 and Garcia eventually get help from Punk against Darby, Sting, Kingston, and Mox and we have a non-finish. A GTS from Punk to Darby ends it. I'm pretty sick and on a cocktail of meds so this likely sounds better in my head right now than it would in reality, but I again point out that the card alone, as decent as it is, isn't big enough to match the size of the crowd and something big is going to happen. Punk simply appearing isn't even enough, arguably.

Let me know what you think happens and call me out for being wrong if you'd like on Twitter tomorrow after the show. Elevation is airing right now on the AEW YouTube for those that are interested and I'll try to check it out when I get an extra moment.