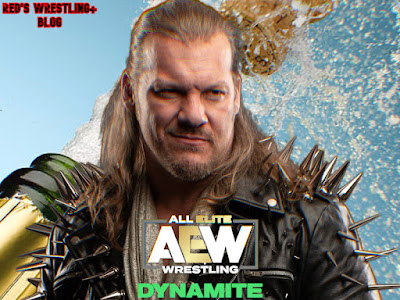 I'm still feeling like shit and last night I passed out before Dynamite began. Better late than never, I suppose. With luck, I'll live review Rampage.

Before we start, let me talk about something I've seen a lot of heading into Dynamite. I'll even keep it short. Simply put, if you don't get the difference between the way WWE uses legends and the way AEW does and you think it's hypocritical to criticize the former and not the latter as if they're the same thing, you're a special kind of stupid.

We start with a run down of what to expect this week and then move to Mox and Eddie coming out to Wild Thing. 2.0 and Garcia attack during the entrance and then the heel trio called out Sting and Darby. This high energy chaos is exactly how I want Dynamite to start more often. Allin coming in from behind to take out Garcia was a nice touch.

A fucking Stinger Splash from Sting on TNT in 2021 has my mind melting.

Note that I love that they have the ramp connected to the ring here and I wish they'd use that design more often.

Thanks to a no disqualification addition to the match, Garcia was soon involved and turned it into a handicap situation but Kingston soon was involved to even shit up a bit.

Darby was murdered a few times and tried suicide a few, too. Sting looked good for his age and him no-selling a double powerbomb through the table was a fun sight. 2.0 were formidable heels that are coming off better than arguably ever before in their careers. The entire thing was highly entertaining and a very fun way to start the show.

Sting got the W using a stacked Scorpion Deathlock.

Their match featured decent brawling before the bell and as well as an ejection spot that went on far too long. The first half meandered in second gear a lot with a few pockets of energy. The fiancé stuff was a bit much, too. The endstretch was pretty awesome at least and they did just enough to get it into recommendation levels for me. Your mileage will vary and I can just as easily see people hating it completely.

Christian Two Belts is backstage with Tony but gets interrupted by Don Callis. Some shit talking was traded back and forth including Don being called a carny piece of shit.

They aired a clip promoting rising star, Dante Martin. The kid is going to be a big deal.

Dan Lambert cut a promo that sounds like something everyone's drunk uncle would do if given a mic. Junior Dos Santos and Andrei Arlovski were with him. Dan made it clear they were allowed to work as he continued to ramble and ramble and ramble with his cheap heat shit. Archer came out, Scorpio Sky and Ethan Page attacked. The segment ended. Not my cup of tea in the slightest.

Backstage, Jericho promoted his match with MJF. Decent promo work from one of the best mic workers in the world.

Tag Title time. The Bucks are out with Anderson, Gallows, Don, and Cutler. Kenny would come out later to smack pocket sized Marko in the back with a golden chair. Christian then ran off The Cleaner. The entire thing was balls to the wall action, as it should have been, and was full of excitement. While there was never any true doubt in the results, it doesn't matter because this was fantastic shit and well worth checking out.

The Elite beat down Jurassic Express and Christian after. Omega was wearing a shirt that said Chick Magnet.

Baker and Hayter cut a promo backstage with Tony and continue their drama with Red Velvet.

A package with Matt making it clear he's not done with the Best Friends aired next to set up him versus Orange.

The Giant is out with Tony. A graphic promoting a special edition of Dark: Elevation for tonight (08/19) is put up. I once again didn't hear the commentary mention it. They had Dark on Friday a few weeks ago and waited until the last moment to advertise it and most thought I was just high until I went and screenshot the graphic proving it. Anyway, the segment saw Paul and QT/The Factory share some drama. It was okay for what it was but admittedly not my cup of tea, either. I have no issue with The Giant working occasionally, especially far away from championship matches, if it means little things like a feud with QT and crew but I admittedly also would be just as happy to see him remain solely on commentary. The purpose was to make it clear that Paul can and will be working matches. In fact, he will be working All Out against QT. Again, it's not something I care a bunch about one way or another.

For the record, I am not likely to be writing up a preview for the Elevation episode tonight. Not enough time especially considering I feel like shit. The only match I've seen announced is Garcia versus Sydal which should be pretty fun, though.

Jade versus Hogan is set for Rampage. Meh.

Tony interviewed The Elite and informed them that an eliminator tag tournament is set and the winner will face the Bucks in a cage match at All Out. Private Party, Lucha Bros, Jurassic Express, and Varsity Blonds are the field.

Cutler's line at the end was gold.

Taz and his son introduce Starks next who calls out Cage. We see Hobbs attacking Brian backstage as Starks looks on but when Cage starts evening up their brawl Team Taz bolts. Meh.

Tony chats with Death Triangle, Andrade interrupts and Chavo shows a textbook of rules that are required for Andrade to officially agree to a match with PAC. It was okay. This eventually sets up Andrade, Rush, and Dragon Lee versus Death Triangle, unless something changes, so I'm stoked for that, at least.

Thunder Rosa and Ford had a good one with TR taking the "hometown" win. I admittedly am still not sure why this got a hotshot but it did.

Arn's kid is apparently going to get decapitated.

Miro issued a challenge for Eddie Kingston. That should be badass but I am unsure if I agree that it should have been booked right now. Neither should take the L. Oh well.

Moxley and Garcia is set for Rampage. That'll be interesting. The way they're using 2.0 and Garcia still tells me something big is planned and I'm enjoying the ride.

The match was pretty good stuff for sure. Jericho looked super motivated and MJF continues to prove he's an elite class heel. I really thought Chris would either win to set up a losing unit must disband All Out clusterfuck or that Jericho would say fuck it and decide kicking ass meant more than a victory and would hit numerous Judas Effects or something. It was a surprise outcome but I am more intrigued perhaps now with what's next than I was before.

The best pro wrestling variety show in the game gave us an interesting ride this week. The matches ranged wildly in style and tone and the main event ended in surprising fashion. Nothing in-ring was bad. I personally didn't care for a lot of the rest. There's a bit of something for everyone in AEW. Some weeks I love it, others not as much, but here we have a bit of a mixed bag. Go ahead and watch it if you skipped the installment and are a fan of the general product because, as I suggested above, there's likely something here you'll like and it once again went down rather smoothly.