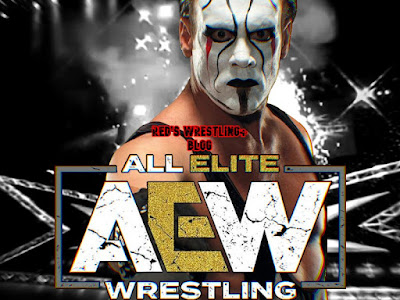 AEW is in Houston tonight, very close to my home town, for Dynamite and they once again have a pretty stacked card for us fans.

Sting will be competing on TNT in 2021 and it's an amazing thing. He and Demolition Darby will take on 2.0, which is a team that I still am shocked to see get pushed so hard right now. Sure, they ate an L alongside Garcia against Mox, Dipshit Darbs, and Eddie K, but just getting that match to begin with is a big deal. They're eat another here, but expect a bit of smoke and mirrors and some shenanigans. Maybe Garcia gets involved? I honestly think the card placement for this one will be telling, too. Something big might be planned but we'll have to wait and see.

Speaking of, a lot of buzz is surrounding AEW this week. It's the annual Week of Punk and CM Punk is set to kick off the third Summer of Punk on Friday. Will they tease him further tonight or do something more direct...

Another angle planned for the night, that was postponed a bit, will involve Dan Lambert and ATT. That should be interesting. Oh, and QT will get a moment with The Giant.

Note that the AEW site had listed Cage/Starks and a Baker match, but those seem to be off this time. They might still fit in something for them. It's already feeling like a crowded episode thanks to the Thunder/Ford addition.

Thunder Rosa and Penelope Ford had a moment on the YouTube secondary shows for AEW this week and will have a match move to Dynamite as a result. I admittedly was hoping it would be a feud stuck to Dark or Elevation, but whatever. Rosa will be winning as they continue to set her up for a Baker match by the end of the year, that is unless they instead have Ford win by shit tactics to keep it rolling for a bit. Honestly, the latter seems most likely.

Sammy G and Shawn Spears continue their side of the Pinnacle/Inner Circle drama and Guevara is also going to make some form of announcement tonight, apparently. I have no idea what the latter is, but this could be either Sammy getting a win or Spears stealing one. Flip a coin? It'll be okay for what it is.

The AEW Tag Team Championships are on the line with Jungle Boy and Luchasaurus challenging Matt and Nick. We'll get some nearfalls, some awesome action, and it will likely get more time than the rest of the matches on the card. The Bucks will retain. Jungle will continue to look like the future main eventer that he is.

First, being from the Houston area, let me say that I have very little hope that the fans will be able to sign Jericho out in a way that isn't a giant mess. If Sammy leads them or something, maybe.

Second, I want to praise this rivalry. It's been truly entertaining top to bottom, warts and all.

The stipulation tonight, other than the theme thing, is that Jericho can't use the Judas Effect finish. Of course, he has a few other options. Will they give us a crowd pleasing moment with Chris winning? Nah, I say MJF pulls a lot of bullshit and it ends in a dq. It's bold, but for story reasons it'd work. See, you can then use that moment to set up an All Out match between Pinnacle and Inner Circle where the losing team disbands. That likely won't happen so who fucking knows. It'll be a solid match on its own for what it is.

Tonight promises to be another interesting two hours of pro wrestling. The championship defense should easily be MOTN, but nothing here should be bad and I expect the momentum that AEW is carrying right now in no way slows afterwards.

Tune in and feel free to call out how wrong I am about things or whatever on Twitter.