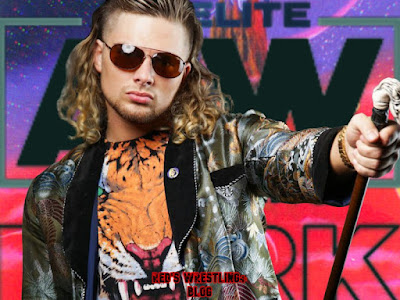 It's time for another edition of Dark and we're starting with 2.0 in action. The Texas Tornado Tag match is teased during this one and I am still in awe of the fact that THE ALMIGHTY STING is working a match on TNT in 2021. This year is so fucking weird. I'd love to see Eddie Kingston join Excalibur and Taz on commentary one day, by the way. That'd be an awesome combo. In the match, Andrews got a little spark hot tag moment but this was for sure a 2.0 match where the duo went through a bit of their playbook ahead of that beforementioned match. Extended Squash.

Tay time. Her energy is infectious, but my illness is even more so. Scott selling that knee strike was well done. Conti mostly rolled through and I'm pretty sure we're going to see her against Baker before the end of the year. Decent squash.

Brock Anderson and Lee Johnson took on Keys and Slade in match number 3. Decent competition that featured some real potential for sure. Anderson is a cool shade of his dad. Keys and Slade were decent, too.

Wheeler Yuta and Matt Hardy in the four-spot, building off of that HFO/Best Friends drama. Good fundamental based work for sure. Want another example for how weird 2021 is? A former CHIKARA Hawk and Matt Fucking Hardy just wrestled each other and Bryce was the ref on a video that had over ten thousand people watching live. Life is weird as hell, people. I appreciated how much Yuta got in here and love the respect the company has been showing him and how they've allowed him to actually work. WWE's loss. I was right when I figured it'd be a bit dirty and that Matt would win.

Private Party attacked Taylor and Yuta after. Orange made the save and Matt was carried off by his unit-mates.

Yeah, good overall but the predicable shit finish did hurt the quality a tad.

Masha's name sounds like a damn cartoon character for a wrestling show that'd air on WB back in the day or something. Remember last year when AEW ran a women's tag tournament, by the way? I was really hopeful that they'd establish a division and belts but...nothing. Ford picked up the predictable win over the cartoon Russian but there was a bit of offense and even some nearfall action for the opponent. It was okay but still basically an ES.

Orange should have came out with Kris with some food.

Former Impact roster member, Kiera Hogan and Stratlander. We had cartwheel boops, running dropkicks in the corner, and a badass held suplex from everyone's favorite alien. Kris won ahead of her match with the champ. In all, it was solid. I am pretty sure they're adding Hogan soon and I have no doubt that she'll get a good little push when it happens.

A Best Friend hug followed.
Cole was pushed aside a few times during the entrance for our next one. The Lucha Bros and PAC almost lit up a flame and got a nice pop on their entrance. Fun shit. Luther and Serpentico are such a fun team. I don't need them on Dynamite or Rampage more than a handful of times each year, but Dark and Dark: Elevation are good spots for them. Cole was okay. Death Triangle was fun as always. Andrade interrupted and nearly saw PAC get flash pinned. He wasn't, Andrade laughed and walked off, Luther pulled his tag partner down, and Cole became a sacrifice. Yeah, honestly just an ES. If Luther ever turns on Serpentico, we wont be able to tell. That won't happen either way.
Have you ever coughed and it hurt your whole damn body? How about a sneeze? Being sick fucking sucks.
Tina San Antonio was sacrificed and we'll always forget her. I am pretty sure most Texans would get that poor attempt at a joke though many don't actually know what happened at the Alamo. It started with a spear and ended with a beast bomb seconds later. Taz was confused that Tina wasn't billed as being from Texas.
Vicky screaming was longer than the match. Sigh. We were told Rose would be champ again at some point. I honestly hope it's not too soon and would like others to get pushes for a while instead. Get her involved in a side rivalry or two for a while on the C and D shows.
Taz suggests that Dark Order will break up within a few weeks. Puts over his unit. I don't expect a breakup, for the record, despite also admitting that he was just being hyperbolic. I just expect to maybe see some go and align with Bray and go heel, acting more like the original plan for Dark Order, perhaps... I'm probably very wrong. The heel trio here was well picked. RSP in an AEW ring is a nice sight. The rudo side got in some offense to set up a comeback style victory for Dark Order's Silver, Reynolds, and 10. Decent. Collier can no longer have babies.
Silver is the Cesaro of AEW.
Nakazawa and Cutler are out next. Spray cans in hand, Cutler was set to face The Elite Hunter, and first ever PWG Champion, Kazarian. Cutler played the coward and it even had a chase spot. Brandon got some face shots while wearing a face guard. It was...average but funny adjacent. The finish admittedly got a slight laugh.
Taz might die laughing tonight. RIP.
Drake came out looking a bit like the Entourage meets Big Boss Man. I'm super surprised that this isn't the main event, by the way. If they announced it previously, I missed it. I ordered a Luchasaurus from the AEW website for my kiddos and somehow the autofill fucked up. I thought I had checked but maybe not. Who knows now. Credit to them because they responded quickly to my email and are doing okay in fixing it. They love Dante and for good reason. If AEW did weight divisions, he would be a perfect cruiserweight title holder. Instead, I hope he's holding some form of gold on AEW television before the end of 2022. Maybe they're getting him so hot so that he and his partner, when he's healed, can take the belts from the Bucks. That's likely wrong. Backtracking a bit, but I like all three teams involved in the semi. The tag division in AEW is so fucking stacked and deep. It's amazing, especially since their biggest competition has very little interest in such things.
Good athleticism and the best thing of the night so far. Even better than expected and a crowd pleaser for sure.
Martin and Moriarty used their time nicely and it was a well deserved main event. MOTN and worth a look to see DM. I want Martin vs Vikingo right now. Martin vs Omega at some point would be nice, too. And Darby. And, well most of the AEW roster.
The main event proved that if a certain injured worker isn't able to return soon enough, Dante is going to be a solo star moving forward. That is, unless they launch a six-man strap and have him work that spot for now. It'd be fine.
Dark was fun once again and continues to grow more and more on me each week since a few installments ago. Personally, I really enjoyed this one and think it's worth seeing. If you want to see a development style show with a loose tone, some squashes, some builders, and some strong action, check this out.
I feel like shit. Bed time. Thanks for reading.