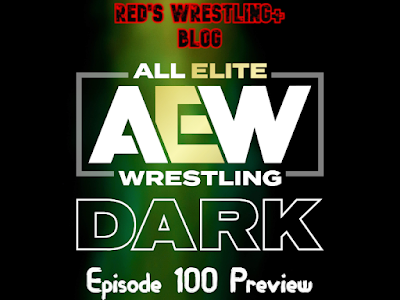 EVENT CARD:
1.Hikaru Shida vs Madi Maxx
2.Jack Evans vs PAC
3.Penelope Ford vs Reka Tehaka
4.Hardy Family Office, The Acclaimed vs Sydal Brothers, Varsity Blondes
5.Diamante vs Leyla Hirsch
6.Jon Moxley vs Brick Aldridge
7.Eddie Kingston vs Dante Martin
8.The Pinnacle vs Shean Dean, Fuego del Sol
9.Tay Conti vs Kenzie Page
10.Best Friends vs Wingmen
11.Lucha Bros vs Chaos Project
Thoughts & Predictions:
Dark hits #100 this Tuesday, and honestly the card is pretty fun.
Shida will face the debuting Madi Maxx, who actually worked an NWA Powerrr taping last year. Hikaru has been working Elevation since dropping the championship to Baker back at Double or Nothing. She's going to clear this one easily. It's either a squash or something that basically is a squash with extra steps.
PAC and Evans promises to be a fun sprint. PAC gets the nod here over Jack for sure, but I expect it to be an easy MOTN on paper.
Ford beats Reka. It'll be short and average at best.
Up fourth, presuming they don't change up the order, we have Matt Hardy, Blade, and The Acclaimed against the Sydal dudes, Pillman, and Griff. The rap alone should be worth seeing, but the match could be a solid three-star match. I think Matt and crew take the W here.
Diamante and Leyla should be a a MOTN contender if given time. Leyla wins here but yeah, I really hope they give this one time. Hirsch is seemingly being prepped for something down the line and I'm all in on it.
Mox gets a squash victory against a dude so green that he doesn't have a cagematch profile yet. The entrance will be longer than the contest. Imagine, though, if they really wanted to shock fans on this episode and they gave up a surprise victory. I won't happen.
Dante Martin is on the rise. I guess his brother is hurt? Still, Top Flight honestly have a lot of potential. Eddie wins here of course, but he'll base for some badass shit like his CHIKARA days first. This might be the MOTN.
Spears and Wardlow will beat the hell out of their opponents. Fans will chant for Fuego. I am admittedly not caring much about this one.
Tay continues to work on channeling Shibata against a returning Kenzie Paige. The latter was booked like a jobber last time and will be here, too.
Wingmen's Cezar, JD, and Nemeth will take on Taylor, Orange, and Yuta. Honestly, this could be great. I won't once again suggest it could be a match of th....nevermind, yeah this could be a very fun six-man. I'll go ahead pick Cassidy and crew and feel pretty damn safe.
The main appears to be Fenix and Pentagon against Serpentico and Luther. This should either be a huge spectacle or a chaotic, but likely still fun, mess. The Death Triangle gang will take the W.
Now, here's a bold prediction. I mean this show is supposed to be a big deal, right? Well, I think that they'll announce CM Punk officially to help push ticket sales for the upcoming show over the edge IF they don't fully sale out Monday. Allegedly the hold off thus far was contract related, but I could be wrong. I likely am. Still, AEW loves big moments and I think they'll use this episode to do...something.
*I've been told TK has no big plans this week, so scratch that.
Wrestling