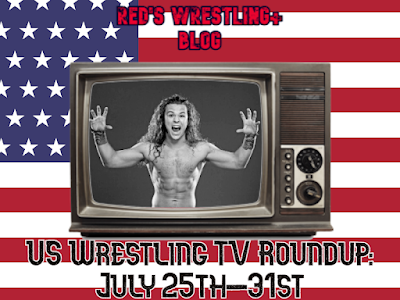 From Ring of Honor TV

This roundup consists of matches that caught my eye. I'll also talk about angles that I feel are worth mentioning. Check back throughout the week for updates. When "ONGOING" is no longer in the title, this post is considered complete.

Styles and Omos retained against the Viking Raiders in a good one to start the roundup. The commercial break did suck the life out a tad but it was still entertaining stuff. I don't think I've seen the VR boys in a while.

Kross lost to Jeff Hardy last week in about 2 minutes while still being booked as a monster on NXT and working as their champ. He was supposed to do the same this week but Jeff is either an anti-vaxer or has bad luck. So, the company that never knows what to do on the fly instead buried the returning Keith Lee for the second week in a row. While I have an idea what they are wanting to do with Kross, as poorly handled as it's been done, I can't help but laugh. Kross bouncing back isn't worth praise considering what they did last week and it being at the expense of Lee, who's been cryptic on Twitter, is noteworthy. This wasn't even a good match.

Flair, who I can't get anyone to tell me when her contract ends, beat the new Raw Women's Champion in a very basic affair. The champ then challenged the opponent and the segment ended with her being starched. Okay...

Over on ROH TV, we had a three-way that was...interesting. It started well and had a lot of good moving parts but the added story plots ended up dragging down the entire match from a quality standpoint. For ROH stans it's worth seeing due to the many future implications, but otherwise you can skip it.

Dark: Elevation got my eyes. I don't watch it as often as I should but time is a bitch.

Jungle and Marq was a good building block. I still think we might get Christian and Luchasaurus turning on JB.

Lucha Bros vs Dark Order was a better than it should've been spotfest on the C Show of AEW. Very good, warts and all.

PAC and Taylor was a good throwaway tv main event and enjoyable for what it was.

D:E has a very loose feeling which is both its' strength and weakness. I might have to watch a full episode one week.

Dark was under an hour this week it appears. I appreciate that. I don't appreciate the random runtimes, though. Like, go ahead and have a set time that you aim for. The lack of definition is a slight pet peeve, too. I will say, the commentary team for Dark is far better than it's partner show. Perhaps better than Dynamite's.

The six-man was much better than expected. Very good tag team action. Dante was a star and the only issue was the finish.

On NXT, Hit Row cut a fun one. They're winning me over.

The tag match was fun. I really like Ciampa and Thatcher together. They worked a fairly good one with a decent fire to it.

I feel the Joe angle is being rushed a bit too fast. Is that just me? The angle this week was a bit cheap but acceptable. I mean, it worked. Fuck it. Their match should be fun.

Dakota turned on Raquel. I don't see a title change but would prefer her as champ if I am being honest. An okay turn.

Wade sat down with Strong, with Bivens, to ask about Diamond Mine. Again, nothing great but serviceable regardless. Fish versus Strong is teased and Cruiserweight asperations after. Awesome.

The next tag had me a bit torn. I don't think in the WWE system that either team should have been set in this situation right now. Oh well. Unit warfare after.

Cole beat Reed in the brand's main event this week. It was the right call considering the matchup. Reed still looked good in defeat honestly and Cole got the step up rub. Fairly good match.

After, Kyle attacked to continue things. I really like their rivalry.

Over on IMPACT, Dreamer complained that there wasn't a number one contender in place and then we moved on to a match that I was surprised to see set as an opener. I am very excited to see Bey in the group and would be cool with a US BC unit that appears on Strong, IMPACT!, ROH, and AEW. We'll see. We're finally getting a BC vs ELITE angle that I hope works better than the last attempt, which fizzled out due to bs. The match was solid enough, but I hated that they had CB eat a pin here. I feel that was a huge mistake.

Later, White reminds Bey he's not actually BC yet and will have to redeem himself. I wonder if we get someone else in BC instead. Ace?

Alexander vs Taurus is booked for Homecoming. That should rock.

The eight-man tag was good. Pure entertainment and a nice crowd pleaser style cluster. Worth considering if you wanna see what the midcard of IMPACT! is like these days. No Way is a terrible name, though.

A battle royal is set up to determine Kenny's next opponent.

Swann got a much needed victory alongside Mack to defeat VBD in a good tag match. The finishing sequence was nice. I'd like to see them as tag champs by the end of the year.

This week's main event saw Moose and Sabin in singles action. The right dude won and it was easily the best thing of the show and one of the better matches of the week. They brawled after Moose picked up the W.

On SmackDown, Rey beat Jimmy. It was a bit overbooked, but was set as a building block match and worked largely for what it was. Fun, largely, if nothing else.

Banks returned to help Bianca with Zega and Carmella.

The contract signing with Finn and Roman was interesting. Corbin attacked, taking out Balor, prompting Cena to run out and sign the dotted line. Circus stuff but comedic I suppose. I'll leave it at that. Balor mentioning a desire to return as Universal Champion to NXT before being taken out is interesting.

Seth attacked Edge and then cut a promo. WWE knows how to do a few things that they just repeat over and over again.

The six-man was the best match of the night and an entertaining affair for sure. Fairly good quality-wise and the right team won. Naka might not be busting out MOTYC's right now, but he at least seems happier than he has in a while.

Banks' return to action was decent. The match wont turn any heads itself, but it was nice seeing Sasha back and it was far from bad. The turn after was the best part.

Thanks for reading. More to come, as always.