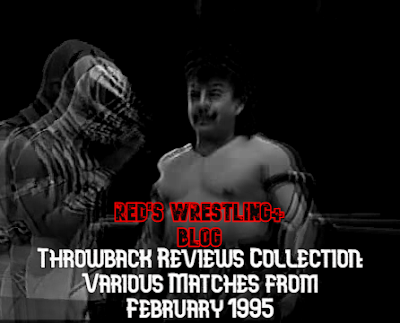 Following a previous post and moving on to the second month of 1995, we start with some AAA before moving to New Japan.

Up first, Fuerza and Juventud Guerrera against Misterio and Misterio Jr with two championships on the line. It was a great match with loads of fun moments, especially basically anything that featured Juvy and Jr together. High quality building block.

The second saw La Parka and Estrada, also for gold. It was a circus act match, built around how charismatic Park is. The finish was the definition of over the top but it was entertaining for what it was.

I lastly popped in a New Japan match because, well why not?! Sadly, despite my expectations, this was rather weak. I've seen less of Shinya than I'd like but this is easily his weakest match that I've witnessed and Norton, who can be very good in the right situation, also came off poorer than usual. The pacing of the whole thing and abrupt ending is honestly the biggest fault but regardless of the reason for my low rating, just know it's really not worth the short runtime.

I'll get around to March soon. Consider checking out any that sounded interesting enough to you. Or not.