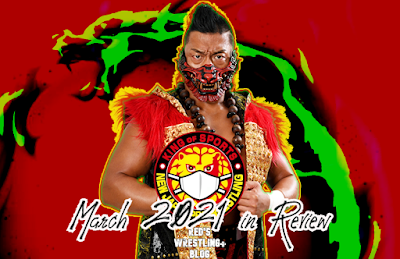 Moving along in my coverage of 2021 New Japan, we start with a fantastic outing keeping the tradition of the Junior title holder taking on the Heavyweight at the anniversary gig. It was a great display from Despy and one of dozens of outstanding performances from Kota. Worth a look for sure.

Next, SHINGO and Okada work a NJ Cup contest in a MOTYC. Can SHINGO have a bad match? The dude has been a titan since DG and is finally getting rocket boots in New Japan and it's going to be one hell of a ride. Run and watch this one if you fucked up.

Forth, Ospreay bested Sabre in a styles clash. Will won my Wrestler of the Year award the first year of this blog and nearly won it again last year. He's that fucking good and makes things look too easy. Him and Sabre showed the fuck up and put in for a badass display.

We close with another chapter in one of the best series in wrestling in the past ten years, with Will Ospreay and SHINGO going one on one for the New Japan Cup. As mentioned above, these two both, honestly, just make this shit look so easy. Even the hard ass Japanese tables broke like butter for them. Not only a MOTYC, but a testament to how fucking ACE they both are and well worth the time it takes to watch it.

The tone deaf attack from WO to Bea after and the WUT response from commentary and then general silence was shit and I hate that it ended on such a note. Oh well.

All five of these need to be seen. Didn't see them? Fix that shit. Did see them? Consider a rewatch of select contests. New Japan was SHINGO and Ospreay's this week for sure and everyone, even Kota, was there as guests. That says a lot.

I'll just leave it at that.

April to be up ASAP.