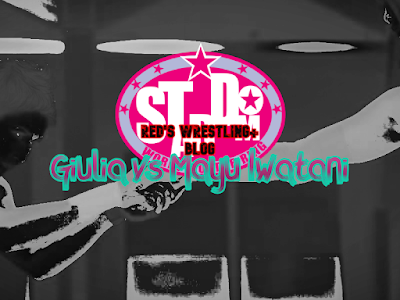 Match from We are STARDOM!! Episode 79:

The amount of folks that have figured out what the titles I give to these forms of reviews mean is rather small, likely because I've made them so damn convoluted and detached that it's not even worth thinking hard enough on them to solve 'em. I overthink fucking everything, of course. Please, don't be like me.

This one is from the most recent installment of my favorite weekly wrestling show and, now that I am caught up, I am hoping to return to watching regularly, in full, each week. Most weeks is more accurate, but yeah...good intentions, but of course time hates me and is something I tend to not be great friends with. It'd help if I didn't spend 30 minutes chatting about loaded questions on how to fix the country with a stranger in the laundry room like I did last night, but that is the kind of thing I often do regardless and will continue to do.

Giulia really turned herself into a huge star in the past year and change and is a hard fucking worker. Mayu, of course, is a star in her own right and I consider her to be the best female wrestler in the world. This didn't have the big fight feel I'd usually want from a singles match between two talents of this level, but it still was very good overall. Borderline great. That shouldn't be a surprise. Consider it a filler or an appetizer for bigger contests between the two, previously AND to come. By my count, the only other singles bout between the two was a Grand Prix battle last year and I know they'll have many, many more in the future.

Spoiler, but this is a time limit draw result. Those can be a mixed bag as often you'll see the workers involved padding things and clearly working towards the saved-by-the-bell moment. I'd argue they did very well to avoid that here. That said, while I am not as high on this outing as many, I still recommend it. Few carry the same talent and spirit of these two and they represent the brand well so yeah, go ahead and check this one out