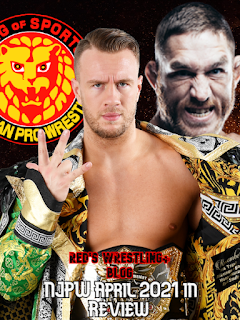 Like the new look for the site? Feel free to let me know if you want to. Don't if ya don't.

This one starts with Ibushi and Ospreay, which I was pretty damn excited to see. I still am not very big on the new belt for numerous reasons, even if it does remind me of something from the tokusatsu world. If nothing else, they took a sure firestarter and started the new lineage with some fucking heat, at least. I knew this would rock and it did for sure, providing for a must-see MOTYC. It just felt like the start of a new era of the brand and, admittedly, that was the point. Lets just hope it's a good era.

Post, Cobb attacked Kota in the name of Ospreay and stood tall, draped in New Japan and RevPro gold. He put himself over nicely enough on the mic. We then saw Okada and SHINGO come out to make his intentions clear.

Next, we close my pulls for the month in NJPW with the USA Cup finals and another crowning of a new strap; the NJPW STRONG Championship. It was a nice big boy battle and a nice display of hard work and just generally some fun hard hitting action. Lawlor works pretty well as the inaugural champ and should do well to represent the brand well.

I only really wanted to see these two from April but I'll say that both were solidifications of a future direction and, if for no other reason, that makes both of these worth watching. They also were great at worst and a MOTYC at best so there's that, too.

I will likely have new editions of Red's RBI, Red Rose Report, and Open the Dungeon Gate up within the next day or two, for the record. Thanks for reading, as always.