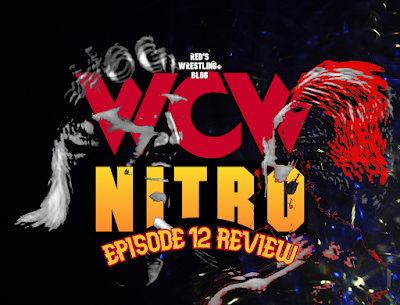 This week's episode kicked off with big boys brawling. It was short, but not terrible, and honestly it got things off with an adrenaline boost so it was fine for what it was.

The second match was actually fairly good. Promoted as Flair vs Eddy, they switched it when RF said Guerrero was beneath him. Guerrero winning might be a set up for story stuff hopefully, but really this entire section of the episode was enjoyable. A rematch please, oh Gods of what's already happened!

Our semi this week was basically time filler stuff. Meh. It was ok.

Sting, wearing the red and yellow, faced Hogan in our main event of the week. Macho came out to Hulk's tunes while Hogan slowly came out through the crowd wearing that shitty mask from last week. Instead of capitalizing off of the moment, it just led to a simple start. What the fuck? What followed was a match that is definitively average (at best). Dungeon broke things up and set up a last minute teaser for WW3. While the match was bland, the post was decent.

This week went by fast and tried to promote the World War 3 show. It kind of worked, but it wasn't the best delivery. Like a plane landing but doing so in a rough manner. The review for the special should be the next WCW thing you see me posting.