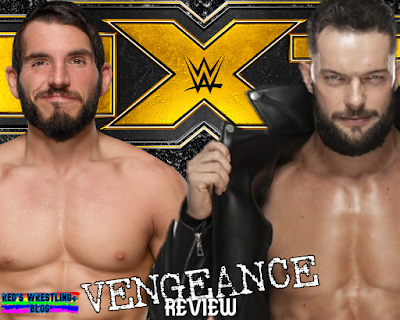 So, I'm plowing through my watch list of stuff I had missed earlier in the year, as I deal with my ongoing health issues, and I'm ready to dig into this little treasure. It was the first TakeOver of the year and has a pretty stacked card, so I'm excited. Note that a companion post, reviewing the month of February for WWE, will be posted shortly after this.

The first match saw Raquel and Kai win a big tournament match over Moon and SB in a very good tag team match. Really, everyone came off pretty well here and I give props to the four for kicking things off pretty dang well. I admittedly have no idea how some people are in the 4+ stars realm on it, but to each their own.

Up next, KUSHIDA and Gargano fucking killed it. I mean, seriously, KILLED IT. Gargano continues to be Mr. NXT. KUSHIDA continues to be one of the coolest fucking dudes in wrestling. It was far better than I expected, and that's saying something. The intensity level mixed with high quality technical display made this a must see MOTYC and something I highly, highly recommend.

The third match kept things moving very nicely, and was nearly a MOTYC itself. MSK and GYV pulled up and stepped up, and the athleticism and overall pace was kept at neck breaking levels while the drama and storytelling built constantly until the conclusion. Also, well worth seeing.

Sadly, the triple threat women's match underwhelmed. While good, it was clunky and chaotic in the wrong ways more than it wasn't and just never felt like the puzzle pieces lined up right. For a TV match it would have been fine, but for TakeOver it just dragged things down a bit and was easily the weakest link of this event.

LA Knight was announced as having signed. You'd think he'd be someone bookmarked for the main roster ASAP but dudes like EC3 were cut so who knows.

The main was fantastic stuff. Hard hits, nice bits of technicality, and a nice flow. Finn rocked as NXT Champ and worked well as a bridge holder during the pandemic for sure. Dunne was a solid opponent for Balor, of course, too. The post-match attack, leading to Undisputed ERA running in for the save, eventually saw Cole take out both Finn and Kyle. It was a big building block for the brand though admittedly I think I would have saved that moment for the close of an episode. That's just me, though.

In all, this event fucking rocked. Even the worst thing was good and the best things were MOTYC or close. TakeOver shows have no right not to rock, considering the circumstances, and this one did not disappoint at all. If you missed it, give it a click.

Digest: A reminder, but I am living on the edge of town for a bit and, while I love the vibe, I also have shit internet. As a result, these are going to be a bit less frequent in quantity. I am also, as always, fucking around with the format a bit for these. A warning, perhaps? Whatever. Anyway, up first I took a stroll through the AEW YouTube channel to see what was being offered up. This, depressing bit of misfortune, was my first taste from the menu. It was raw as expected from the master of the mic, with CM Punk letting us all know that he was jacked up and off to the glue factory. I was beyond hopeful that we were about to get a spectacular Summer of Punk III. Instead, we're getting Mr. Pipebomb walking away to recover. Seeing a bunch of men that you can tell were taught to never show emotion holding back tears is always glorious. Holy shit, this was legit! Bucks/Lucha Bros VIII was just a random match on a Friday night that just happened to be a banger. These four continued t