Late to the Game: Falling in Love with Magic: the Gathering 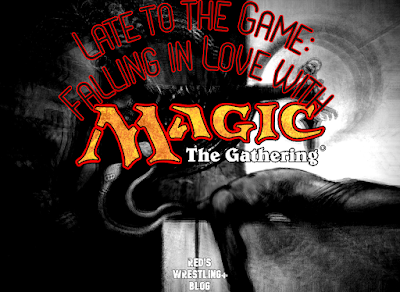 Magic: The Gathering is the original trading card game. Literally, it's the one that started the craze that still exists today to a level that has required stores to limit or completely stop sales for safety reasons. Combining the talent and intelligence of chess with the luck of poker, MTG is the ultimate game of chance for nerds that love to challenge others as much as they do themselves.

I just sadly took far too long to fully embrace that.

See, I have some history with the game. Back in high school, for example, I remember owning a few cards that I picked up here and there. My pals mainly played Yu-Gi-Oh!, but I still had a small assorted collection. I loved the concept even if I rarely got to actually do anything with the cards and I honestly wish I had leaned more into it at the time.

Of course, not that it mattered. Around that same time the televised panic game that is main stream media mixed with assorted egomaniacal religious figures decided that they had some free time to fill and since fear is their main, top seller, well...you get where I'm going with this I'll presume. So, as a result, my Grandma listened and decided to tear up and toss out a large portion of my collection. Yu-Gi-Oh!, Magic, collectable Coheed cards. Yeah, the ones she found were done for because they were evil. Oh, and note that I was raised by my grandparents. But yeah, I get it. I really do. She was scared and manipulated and thought she was saving my soul or whatever.

Still, it took time to secretly build back my decks but they were never the same. It's hard to really try too hard when you just got fucked over, especially when it could just happen again.

In college I got back into Yu-Gi-Oh! a bit, especially when I had my brother-in-law come and live with me for a bit. I built up a tournament quality deck and we'd dual frequently. It made for some good memories.

After he moved out, I kind of dropped the hobby again. I had other stuff going on, too. Then I discovered a MTG app (Duels of the Planeswalker) after a while and I admittedly really enjoyed myself. I had a lot of personal things going on, but it was a fun little game I found myself playing often enough. Still, it never became more than a little thing that I could take or leave.

Then I found myself moving on to other things. I tried to download it again but found it unavailable. Then, they finally released MTG Arena on mobile. Recently I downloaded the game and I have to admit that this is the most fun I've had in a while outside of wrestling and family related things. What was a novelty form of entertainment is now something I have a true love of and I am happy it's a better late than never situation for sure.

The game works on Windows, Android, iPhone, and Mac for those that care. You can play ladder style mana games, quick one off sessions with a general bot, or against others in varieties of different rule-types. While not perfect, it's damn fantastic stuff. The biggest quips for most will be the freemium style, but it's really not that bad. Want to pay for stuff? Go ahead. Don't want to? Don't do it, then. There are crap loads of free cards and full decks you can get and a separate crap load of hours you can spend without dropping a penny.

Give it a try. Or don't. I just wanted to ramble about this little game that's won me over fully lately. What you choose to do with that is your own. I may or may not have also purchased a bulk box off of eBay recently and might do an unboxing video on the RW+B Channel over on YouTube, too. Also, just something that you the reader can do with as they please.

Hit me up for a game sometime...