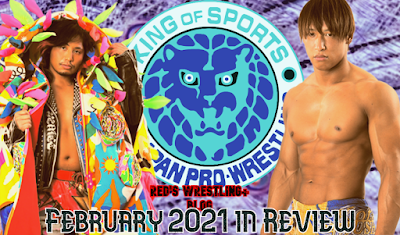 From New Beginning in Hiroshima Night One, 02/10

Moving along with New Japan, and we have five for the month of February that caught my eye.

Up first, Hiromu, my favorite junior worker, defended the IWGP Junior Heavyweight Championship against quickly rising star, SHO! It was fantastic stuff with both looking like stars. SHO might be main eventing the Dome in 5 years. Hiromu, well I fear he'll be Ishii'd, but the dude is forever one of my all-time favorites no matter what.

Kota and SANADA had a very good title match, but one that didn't hit the levels I expected. SANADA can be a bit hit or miss for me, admittedly. This was underwhelming ultimately and I feel it never hit anywhere near the roof, but was still very serviceable for what it was. SANADA and EVIL just don't do it for me in the main event.

On STRONG, Mox defended against KENTA in a great brawl that felt far more like an AEW match than a New Japan one. Still, I appreciated the work and, with the benefit of time on my side here, I agree with Mox getting the W. Worth a check.

We close the second month of 2021 with Ishii and Jay going one on one. It was overbooked a tad, like a lot of Jay's work, but fun as fuck and a truly fantastic match. The finish was fucking awesome, too. Major thumbs up to both.

While it's hard to deny that New Japan clearly wasn't as based as usual during this period, I also found these four to be varying degrees of enjoyable if nothing else. The roster is still arguably the best overall in the world but it feels like they're transitioning into something else and it's not all clicking yet.