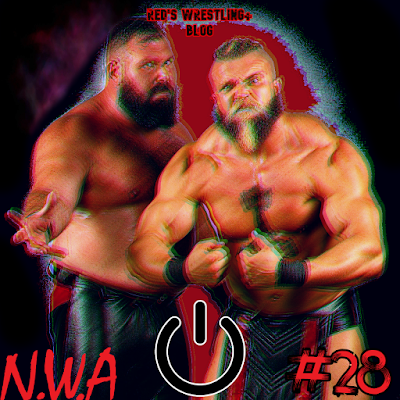 They started this one with a reminder of the Strictly Business drama from the previous episode. Clips first, and then a reading of a note from the NWA on the subject. Aldis was striped of a month's salary, Latimer and Adonis lost their shots at the tag straps, and they are required to appear on the next episode or they're fired. I didn't like the way they capped the last episode, but I like the follow up.

Real quick, but I purchased the M-Pro collection set from IVP today and am very excited to watch and review it.

We then move along to see Cross challenge for the Television Championship. Pope stepped up, Cross worked down if we're being honest, and the entire thing mashed up nicely either way. There was an amazingly timed spot down the stretch that had me rewinding it back a few times (shooting star press related for those wondering but not wanting a "spoiler") and, fuck it, I'm gonna likely be higher than the average on this one but I say it hits worthwhile levels. Short and fucking sweet.

The NWA World Tag Team Champions worked a non-title match next, which obviously didn't feature further issues between the golden boys. I like this current version of Stevens. Well, "like" is strong but I enjoy him more than most of the other times I've seen him. Kratos hesitated to make a tag at one point, later Aron did the same, arguments between the two, blah, blah, blah, and then the champs won either way. Are NWA fans gonna throw a fit because of another superkick being a non-finish? Like, each promotion has unbearable stans, but that argument is always something I hear NWA diehards bitch about and it's always funny. Meh. No thanks.

Taryn and Melina, backstage, talked for a moment. At least it was kept short.

Thunder then had a decent little extended squash to keep her hot. The stip of her not being allowed to work elsewhere continues to be hilarious to me.

I skipped the dipshit talking.

Hoss tag main. It was good shit and getting to that next level but instead we got a called three count on a clear kick out. I'll presume this to be the true, intended finish, seeing as you'd think they'd reshoot if not, but who fucking knows. Maybe the backstagers said, "fuck it" and...we'll, whatever.

So, this one started hot, meandered a bit, though with a purpose, and then closed on a weird note after a rise back up. It felt off, but a major step up from the last installment.