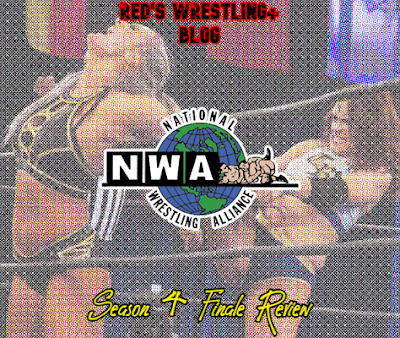 So, admittedly, this season was the weakest so far. It is what it is, but there were some things I enjoyed and most of the time there was a charm here. NWA is an almost comforting show to watch and something I have found to be entertaining even when nearly all the matches fall well below must-see levels. This time, it's just harder to enjoy, though. I'd also say that their build to When Our Shadows Fall has been weak.

This one started with The Pope joining the commentary team.

Kyle Davis welcomed the WTT Champs, which saw Aron reassure us that all was fine. We knew better, of course. They were kept largely to a minimum, at least. We had a run in blind attack lead to the finish, with the champs retaining, and it was all a rather basic match in general.

Nick's promo was okay I suppose, but I must say his work on the past few episodes felt a tad off from his normal levels. The list of names involved in the battle royal got him mad, which was at least well done. The name in particular that got him all Karen'ed up was, of course, Murdoch. He then worked a squash where he took out his frustrations on Mims.

They recapped the Thunder/Kamille angle before moving to the match I was most excited for all season, despite how awful some of the build had been. Funny enough, during a quick run in spot with Taryn and Melina, they blurred things because of a wardrobe malfunction. I am unsure that they needed to blur the entire screen, but their production team might have been unable to do the better option. It is what it is, but I have no major issues with the call. Remember my thoughts on these matters? Don't be a pervert. They went time limit draw on this one, which was a fine move. Kamille shouldn't take an L here and the stip for TR was fucking stupid and not possible, so they arguably booked themselves into a corner here. Not too surprised at the results and the match itself was good, albeit a tad rough around the edges. While just outside of recommendation levels, I still suggest fans of the brand or either performer check it out. Your mileage may vary and some seem far higher on it than myself.

A 14 man battle royale had Idol, Aldis, and Galli working commentary. One foot touch rules. Apparently being removed from the ring at all, regardless of which rope you go over, you're eliminated, too. I'm not big on the match type but those additions were fucking weak. The match itself was very b-league stuff, too. The last three remaining spot and endstretch was okay, but even that was super basic stuff overall. Of course, Murdoch won, which at least sets up a match that I am rather hopeful for. It won't be a MOTYC, but could hit "great" territory if booked properly.

After, Aldis tried to attack Murdoch but the turn tables turned. Trevor honestly looked like he could have a heart attack at any moment. It's not a fat joke, because I don't do that shit. Not gonna shame someone. Fuck, I'm fat right now. It is what it is. But, I also don't wanna see a dude get that winded that fast and look like he's about to collapse and TM looked like it here. I don't know if it's health related, mental, or whatever. It's not my business either way. I just hope he can find a way to increase his cardio a bit. I sadly bet this still comes off as a dick statement.

I have no idea why the season finale aired nearly two weeks away from the payoff ppv, though I have my thoughts on the matter. The season was simple and the weakest thus far during this era of NWA. The charm was lessened or missing completely at times. They also made a terrible move with FITE that I think is likely already backfiring, but that's just speculation. I sincerely tried to enjoy this stretch of episodes, found some decent stuff, but largely I felt like it was almost all a waste of time and energy by the time I finished the finale. When taping like the NWA does, it can backfire. Any company doing block tapings has to do it just right and this time, it didn't flow as well as it should have. It is what it is. I'll try to post a preview for the upcoming PPV if time allows and I'll be catching some of it for sure. I just cannot say they've done anything that makes me feel super motivated to do so.

Check out my reviews for the season, check out what sounds good to you, ignore the rest.