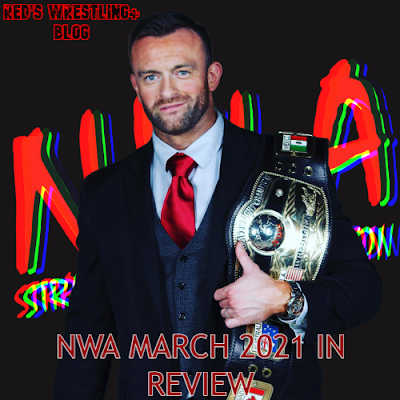 Matches from Back for the Attack:

I watched select matches and promos from their return special, and then some matches from Powerrr for this set. Lets see how they handled their return.

Aron Stevens opened Back for the Attack, teary-eyed, talking about his fallen friend. They also built up the main event, which I wasn't super stoked for at the time but am now interested in seeing.

Aldis had a studio promo next, and was once again gold. Dude works the mic better than almost everyone in the game. The, "don't @ me" line was a bit off but that's just me, probably. Yeah, great shit that promoted the entire card and main event perfectly.

Skipping ahead, Murdoch, backstage, promoted his National Title match with Adonis. I like the dude as Nat Champ. He's a solid worker and honestly just fits the mold for me for an NWA dude, if that makes sense. Solid promo.

Pope and Latimer was good from a wrestling stance and a story side, too. The champ working from underneath a tad more than from above and not being able to put away his opponent is a winner, when done right. Here, it was done right.

Thunder and Kamille wrestled to determine the #1 contender for the NWA Women's Championship next. Fairly good, though admittedly Kamille, the winner, was easily the weak link of the match. She's decent, but far below the quality of TR and required her to slow down a bit.

Stevens' promo to promote his match for the belt was honestly beautiful. While I am not a fan of his work in the slightest, the raw emotion of that promo cannot be denied. Short, but fantastic.

Not that long ago, if you're an old ass like myself at least, Adonis was laughed at for having a finisher that wasn't seen as believable. Now, Lashley is holding the WWE Championship and using it. Funny shit. Presentation and execution matters. Admittedly, I never cared much about Masters. It is what it is. I do like the design of the National strap, though. It's grown on me, for sure. The NWA belts in general, especially the 10 lbs, National, and Women's. But yeah, this was okay but not much in the grand scheme. Murdoch won, flash pin style, which told me that this was more throwaway building block in the grand scheme. Okay for what it was. Masters attacked after.

The main event delivered decently. I acknowledge that Aron is a solid worker, even if he is focused more on comedy that doesn't do much for me most of the time, but since he rarely shows it, well it can be hard to "remember".  Thanks to the circumstances, he showed it here. This might not be a MOTYC, but it is likely the best NWA match we'll get this year and was sincerely worth seeing. I'm not sure how Aron technically "earned" the shot, but he showed the fuck up. My sole nitpick is the cheap finish. Not my thing and we just had a flash pin before this one. Oh well. Check this out.

Moving to Powerrr, the first episode back had two match pulls.

#22 stars with Strictly Business. They talk shit, talk about how they're all gonna be carrying gold soon, and teased their partner for the episode's main. I had forgotten Royce had left the brand for a minute there.

A three-way #1 contender match for the TV strap saw Rosser take the W. Admittedly, I'm not huge on the dude but I get it. Too bad Cross couldn't get the nod. Decent, spirited sprint but largely forgettable stuff overall.

Slice Boogie looks to be a fun roster add-on. Hopefully they don't go down a "sexual harassment as a face trait" 80's style road with him.

Thunder and Melina had a studio moment. Soap stuff, with Melina gaslighting while asking to be aligned with TR, just to be politely rejected. It's not over for sure.

The main from the episode saw Adonis join Aldis and Latimer to take on the brand Tag and TV Champs. Building block, world developer match here, setting further foundation and serving as a better than expected match, too, even with the finish. Honestly, mileage will vary here, but I really liked this. Pretty good and it all worked well for the goal in mind.

So, Strictly Business seemingly might be all draped in gold by the end of this season. That's my prediction, at least, and I'm for it.

On the next episode, Aldis started by telling us he had a serious medical condition. That he couldn't stop winning. Great shit. The National Champ cut him off shortly after, calling him out for being a dick and aligning with Adonis. He then called out Masters for the attack post-match at Back for the Attack and asked for another match, with no disqualifications. Nick took umbrage with the interruption, since it is his show. He gave props for their Race connection which led to a well done attack spot. Adonis beat down the Nat C, setting the tone for later.

The Tag Champs spoke backstage, with the big takeaway being Aron leaning heavily into being a face now as well as Sal getting a thumbs up for a title shot.

Pope and Rosser shared a studio spot to set up their upcoming TV Title match. Mainly just Pope talking himself up.

I skipped a women's tag match from #23, but saw the end. Kamille ran in and attacked Rosa, causing a DQ. Melina stood by Rosa after to prevent further damage.

Nick joined commentary, adding some re-heating with Storm which I loved, for the main event. Murdoch came out with a neckbrace for his defense, selling the attack even more than expected. Thanks to the story choice here, their match was just an extended squash. I'm not huge on the feud, the angle, and change. It is what it is. Adonis is clearly going to be a big part of the show moving forward though and we need to know that.

COVID hit NWA arguably more than any other promotion. They largely were MIA for the year of 2020, existing in taped form only for less than half the year and with their last live events taking place in January. The UWN set was interesting, too. Recorded on its own, they eventually repurposed some of that material as Shockwave. They got by, but the real true damage came from the layoff and the amount of roster members they lost as a result. Mix in their biggest angle being killed off when Marty was exposed as a pedo, and you have a big question mark hanging over the company. I'd say they did just fine, though. Back for the Attack felt very on tone for the modern brand and the content I saw matched what I expect from them. NWA will never blow you away with MOTYC level matches, but you'll get consistent, modernized old school wrestling in a fun package. I have issues with some of their hiring choices, but just will not watch those matches nor give further mention to such things here. I saw several folks on Twitter say they wouldn't watch because of it, though. More importantly, seeing as every fed hires problematic people, I'd say their move to Fite is a mistake. They put their weekly show behind a paywall, which decreases eyes on Powerrr and then decreases the amount of folks hyped to pay for special events. Their YT channel gets very little love and inconsistent uploads, now. It's not a choice that enables growth. They've stagnated their future and it's a shame. Oh well. Past that, I'd say that anyone who likes the NWA has reason to be excited as long as their willing to either pay up or be a scallywag.

Check out anything that sounds worth your time based off of how I sold it. Or don't. Whatever floats your root beer.