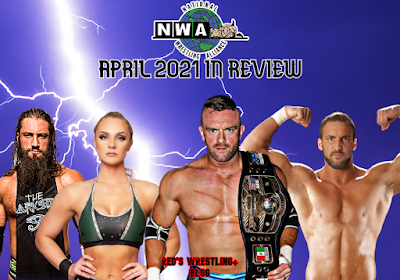 March saw the return of the NWA and, all things considered, it was a decent relaunch. I took issue with their move to FITE more than anything, which I strongly disagree with, but the diehards seem to be happy and I found two worth seeing matches during the span. So, how did April go for the old schoolers?

Up first, we look at episode 24 of Powerrr.

Aron and Kratos kicked things off, saying they're scouting talent. Sal interrupts, asking what's going on with his shot at the belt. It got convoluted.

The first pull saw Strictly Business' Adonis and Latimer best The End, with a little help, and the entire thing, while super simply, was far better than I had expected. I really like both of these teams and hope they'll be involved more in NWA as two man'ers.

Thunder and Kamille shared a moment. Then, Taryn Terrell debuted for the brand to introduce herself and her character. I am very excited about this. Melina added nothing but tried nonetheless.

Murdoch cut a backstage promo, building off of his title match where he was cheated out of gold. Great shit.

Aldis cut an even better one in the studio. The dude is a master of the mic. The big news is that his faction is wanting to grow in size, teased that they could cut someone that doesn't live up to the brand, and teased members in other promotions. They need a good logo and shirt and they could be a fun little niche big deal. I'm in on it.

The Television Championship match was good stuff, too. Honestly, it might be the best singles match I've seen with Rosser and it is certainly one of the better ones that Pope has had recently.

Over to #25, we start with Murdoch cutting a promo, joined midway by Aldis. It was okay, but honestly not as fire as usual.

We ended up getting a Tag Title match after all for Sal. The dude apparently has lost every NWA match he's had on Powerrr. Well, that changed here. He was beat down over and over again, eventually leading to Storm assisting and getting counted as a partner in a flash pin victory. The bigger story is the further tensions between the champs.

After a Kamille match, the Strictly Business member took out Melina and then shared a moment with Thunder.

Aldis and Clearwater was a match I was very much looking forward to. Instead, fighting at ringside between Latimer and Adonis with Murdoch spilled over from backstage and ended it before it really started. The heels stood tall at the end.

Velvet speaks far too quietly, by the way.

On 26, we start with Aldis and a studio promo, building off of the Murdoch situation. Nick was once again a tad off here, though still better than most. Murdoch, on the other hand, was top shelf. Building block stuff. I am likely in the short list on this, but I am looking forward to seeing the end game match. The stipulation that Murdoch losing results in him leaving, "unpaid" for 30 days is interesting only if the next season follows within a week or two tops after the upcoming special event.

Ever make edibles but not know how strong they are, so you're stuck waiting after a small sample to avoid over doing it?

A squash is the first match of the episode, with Kratos getting a payback win over Sal. I'd like to report an overbooked murder. How can something be this heavy handed despite the super short run time? It further divided the champs and I'd add that the tension between Kratos and Storm was well done, at least.

Latimer and Adonis came out and added Kratos to the main event as a partner, suggesting he might be a new addition to the heel unit.

The studio spot between Slice and Dane was decent.

Pope defended the TV strap in a time-limit draw with a huge dipshit that I skipped.

Thunder, who has been an MVP level worker for the season, had Melina speaking on her behalf. Kamille utilized Taryn for herself. It was supposed to be a delegated debate regarding their ongoing feud. It was messy and not my thing, feeling far too much like some common, basic shit I saw a thousand times back in high school. Yeah, I'm not gonna sugar coat it. This was a fucking headache. It will apparently flow into next week with a list of demands, because it was far too hard to just do it here.

The main saw the tag champs on opposite sides of the ring, continued to angle with Sal, Storm, and Kratos, and, more importantly, pushed forward the Murdoch/Strictly Business rivalry. A huge brawl at the start, but things settled down nicely shortly after. While we did get a shit finish off of an (unintentional) distraction spot, the overall match was still fairly good stuff and largely enjoyable.

So, I'll say that this season is arguably the weakest thus far. That said, the charm remains and I can see why fans would enjoy it. I have nothing truly recommendable this time around, with almost everything being decent to good but never hitting must-see but consider it nonetheless if you've enjoyed the past seasons more than nearly anything else in wrestling.