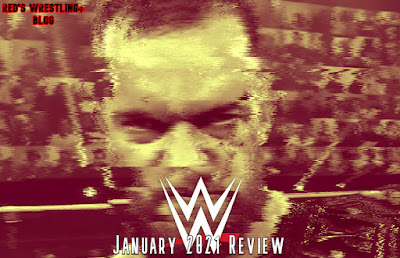 I'm moving away from the previous roundup format that I have been using and shifting to a similar, but different, month in review style post to see how that goes.

The first match pull is from the episode of Raw that brought The Giant back to TNT. Fun trivia I suppose. The match was actually really good and it was nice seeing Keith Lee in a big match spot. He made the best of the opportunity. The dude is a fantastic worker but isn't getting to show it often enough in my opinion. Drew did well here of course, too. Dude was a workhorse champ. But yea, I mean this had Keith hitting an avalanche spanish fly of all fucking things and was a very good match for the WWE Championship.

The second pull sadly was disappointing. Gran Metalik is a great worker but wasn't very smooth here which sadly will ensure he doesn't get another chance like this anytime soon. This was a bit of a dream match for me but it just barely passed as good for me. Honestly, they coppered. I'd love a rematch one day but doubt they run it.

Next, Rhea and Raquel in a Last Woman Standing match! It was a car crash in the best way possible, full of creative violence and a decent finish. Gimmicky to a tee and fantastic in delivery. Truly, a wild and fun encounter.

The last pull from the New Year's Evil show saw a rematch of Kyle O'Reilly versus Finn Balor for the NXT Championship and damn it was a fantastic war. While not as good as their last encounter, it was still a high quality technical battle with a nice level of intensity. I appreciated the pacing, drama, and storytelling here and considered it a fantastic match between the two stars.

Moving on, we have a gauntlet match from the blue brand. Rey quickly put away Sami, who's selling a conspiracy angle here, before we moved on to Naka and Mysterio, which was a fun one for sure. Corbin was sadly up next, attacking Rey and son like the ogre he is. The match between the man formerly known as the King of Strong Style (I don't care if they still use that, he's not been a king of anything for a long time now) and the King of Potatoes was honestly better than expected due to how motivated Naka came off. Up next, arguably the best US professional wrestler of all time. American Dragon versus Dick Puncher! Yea, I haven't forgotten about that shit. They hit the gas pedal and kept it going. Good shit. Last up, Adam Pearce! The dude is one of those guys that was just a few years too early and his rivalry with Colt is something I still recommend fans check out today. They set it up with Roman and Uso beating Shinsuke down before Jey gave Adam a random superkick and then placing his corpse on Naka for the three count. I have no idea what the story is here and honestly I have no attachment to it either way. I will say that Shinsuke looked really good here which was nice to see. In fact, he looked better than I've seen him in a long time. The layout worked well for the gimmick and everything delivered rather nicely. While I would have preferred to see Sami get an actual match, it is what it is. I also didn't care for the ending at all and it really felt a bit like a thud. Still, the gauntlet overall was good stuff even if it didn't hit recommendation levels so props for that.

Over to NXT UK next for A-Kid versus WALTER. Note that I absolutely loved WALTER's match last year with Ilja and even gave it five stars. If not for Go and Sugiura's war in NOAH, that would have been my MOTY. I'll add that I generally enjoy the hell out of WALTER matches in general. I'd also add that A-Kid is a dude I was praising highly before WWE picked him up and I am happy to finally see him in a big spot. Expectations were high for me, even with this basically being a throwaway defense. A-Kid, walking in after his victory in the Heritage Cup tournament, and the walking titan, WALTER, put in for about fourteen minutes and they leaned a bit into the classic David and Goliath genre here but perhaps not as much as I had expected. It doesn't ultimately matter either way because they fucking killed it here regardless and like most Maiden tracks this rocked hard, kept shit largely simple, but also had some weight under the surface. Fantastic stuff!

Back to SD, for Jey and Naka. They went 50/50 here in a first gear match that featured a shit finish tease and then Naka getting a cheap flash off of the circumstance. It was okay for what it was but never really got much out of first and felt like no one truly benefited in the end.

From the same episode, Bryan and Cesaro put on a great match that I had a lot of fun watching. This was simply two of the best pure wrestlers in the world having a quality match and it's an easy recommendation! I can watch these two go a thousand times and never get bored.

Shooting over to Raw, we had Ricochet and Styles. In contrast to the Shinsuke/Uso match, this was a 50/50 done right. The pacing and work rate far eclipsed that contest and was a borderline great match featuring two dudes working hard. The creative finish is cherry. Worth a look for sure.

Ciampa and Thatcher's Fight Pit match was a great battle. I really like the match gimmick and they certainly chose the right participants for such a match. Gritty shit in the best way possible and I loved that Thatcher was given the nod here, too.

I closed the set with Roman and KO's Last Man Standing match from this year's Royal Rumble. They started with a few finishers stored in the bank and leaned into the gimmick head on. They brawled around the arena and put in for big spots, including a golf cart run down, and spiced in some nice drama. Truly, fantastic stuff and honestly far better than I thought it'd be. Until the end stretch, at least. That was a dumpster fire. If not for the pace killing final few minutes it might have been even better. I still think it was worth seeing but it hurt the overall match a lot. Check this one out for sure but be prepared!

Other things of note for the month that I noticed was Bianca Belair winning the women's rumble and Edge the men's. It's a bit funny that those are polar opposite results, seeing as one is building up a new star that WWE sees potential in and the other is VKM pushing a legend to try, but fail, to boost ratings. I have no actual issue with Edge winning, to be clear, but I can see why some would. I also note that I liked seeing that Drew beat Goldberg, as we were all sure they'd go the other route with that one. There may have been other big happenings this month in WWE, but those are the biggest ones that caught my eye looking back on it a few months later. Anything else I admittedly either forgot reading about or didn't interest me enough to mention.

I have a move coming on Monday. Just a heads up. Thanks, as always, for reading. More to come as I can.