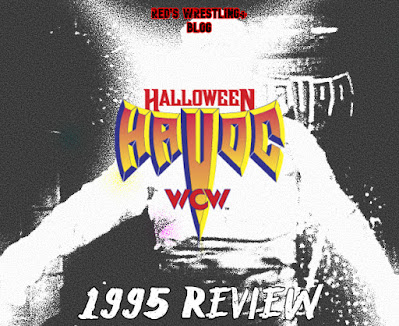 9.WCW World Title, Title Can Change Hands Via DQ: Hogan(c) vs The Giant *

This is one of the most infamous PPV's of all time and considered an all time worst with only a handful topping it. The thing is WCW at the time was a combination of things and cheese was a big part. With this show, they leaned heavy into that shit.

The show starts with an update that Flair was reportedly attacked by Pillman and Anderson before and then we moved on to the opener which saw Badd beating DDP for the Television Championship in a solid match. This rivalry eventually led to Badd leaving WCW, by the way.

Savage and Zodiac followed with a hokey, but thankfully short, one on one. The only interesting thing I saw here was a fan trying to get involved.

Badd, backstage with Gene, told kids to never give up and that he'd never leave WCW. That aged poorly just months later, of course.

We were given another short match next, with Hawk and Kurasawa competing. Hawk dove onto the Colonel near the end before Kurasawa landed a Samoan drop and then got a three while using the ropes (while Col. Parker held his legs). It was...okay for what it was I guess.

Savage tells Gene that he's gonna show Luger who the real man is and then throws his support behind Hogan.

In the four spot, Sabu and Mr. JL had a match that showcased a bit what the Cruiserweight division was soon to be, but it leaned a bit too much into the chaotic messiness. A cocaine influenced car crash that never found enough balance to really be much of anything.

Sullivan and The Master try to get us excited for the main event and Tony and Heenan talk about Yeti with a straight face somehow. Hogan gives the keys to a new hog to a contest winner and then does his part to promote the match. It's very awkward.

Meng must have threatened someone to ensure that his match wasn't a quick squash because it went over 12 minutes before Lex Luger took the win. Honestly, it wasn't complete trash and both worked well enough here. Truly, the second best thing on the card so far (low bar) and there were glimpses of something here even if it never really hit the right marks. The finish was stupid as fuck, with the ref calling for a DQ because Sullivan came into the ring and gave the weakest grandma looking kick that I've ever seen.

Giant and Gene talk about the main event.

Anderson and Pillman took on Sting and Flair next. This one sees Sting go it alone for an extended period, with shades of Nitro, before Flair made his way out in casual attire. The work was easily the best thing you'll see on the show and the crowd was eating it up! That made the turn even better, with Flair finally tagging in just to take out Sting and align with Anderson and Pillman. While the plot makes no sense, this is wrestling and it was handled pretty damn well. I thought the match, even with the finish which was enjoyable on its own, was very good and I have to say this saved the show from being complete trash. It was basically a handicap match and I'm pretty sure I've never rated one of those this high before. Consider checking it out.

Luger talks with Gene which went about as well as it has been.

The monster truck battle was next and...yeah...it was pure insanity and easily one of the most 90's things you'll ever see. Pure circus act stuff that even my kids thought was over the top. After, Giant was thrown from the top of the building because....well, of course he was.

Seeing them try to sell Giant's death was gold painted shit in the best and worst way.

Savage beat Luger next in a match that happened. Really, this feud needs to stop.

The Giant's music plays for his entrance but Hogan comes out and cries that he didn't mean to kill a man. Then, The Giant comes out completely dry and alive as if nothing happened. Their match was worse than expected and that's before the bullshit at the end. It felt like over half of this run time was bearhugs. There are contests that make time seem to be cut in half but this was 16 minutes or so that felt like 60. They tried to make this Andre/Hogan but it was just a low budget shitty sequel made by a meth addict. I mean, the finish saw Yeti come out and hump Hogan from behind. Oh, and Luger did some shit that added nothing but more flame to the dumpster fire.

Squashes, disqualifications, low level athleticism and questionable booking. That's not even including the Hogan/Giant bullshit. Honestly, looking back I have no idea how fans allowed WCW to remain so hot after this show. Nitro has been hit or miss so far but this was sincerely one of the worst special events I've ever watched. I'd watch Raw most weeks over this crap and that's saying something. If you have an enemy, tape them to a chair and show them this. They'll never bug you again.