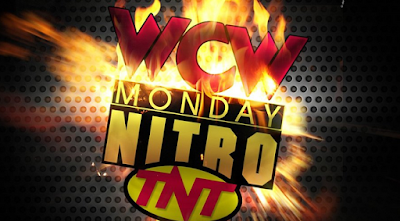 The opener this week was decent I suppose but felt like a waste of Guerrero's talents. Oh well, at least he won.

They then moved to showing clips of Shark and Norton's feud. I have very little interest in that but my kids like Shark so they're excited, at least. Their match was okay but ended in double countout as they brawled around. It was under three minutes, at least.

We run down what happened with Sting next before Flair, Pillman, and Anderson walk out to chat with Tony in the ring. They put themselves over and promise a new member soon. Good shit and I agree that it's arguably the best thing going on with the program at the moment.

Next, they tease something with The Brain and Sonny Onno.

The third match saw Sabu and Disco Inferno. Sabu got the most in, but it was sub-three and not enough meat to be anything at all, really. Sabu once again attacked after and we even had an I AM THE TABLE moment where Sabu plopped on the table when Inferno moved. It was okay for what it was, at least. Again, the issue with episodes like this with four matches is everything suffers.

From what I remember, this was the last match Sabu worked for WCW.

Taskmaster, Hart, Meng, and Luger made their way down next followed by their opponents, The American Males. What a weird ass matchup. As expected, it didn't add up to very much, either. About seven minutes long, which was at least four too long. The fact that they ran this as long as they did instead of...well, nothing on the card was worth a longer match, really. It was not good.

The episode ended with The Giant and crew, still with the Big Gold Belt, mocking Hogan etc. Why the fuck would they show the Yeti shit again? Dear god.

Easily one of the weakest hours of WCW Nitro so far. Also one of the worst episodes of wrestling I've seen in general. Skip the hell out of this.