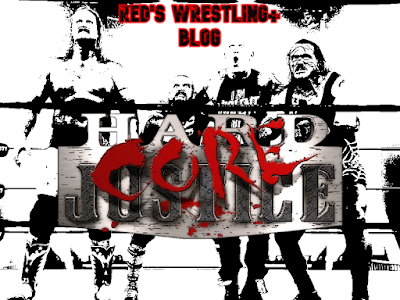 My first thoughts, as the teams for the opener came out, is that IMPACT needs to revive Team Canada officially and ASAP. It was chaotic cluster style action but things were kept moving nicely and the entire thing was good. While it never broke into recommendation territory, not everything needs to. More of Alexander and Petey together, for sure.

The Jazz retirement match was decent. I mean, I didn't have unreasonable expectations and it was more enjoyable as a result. A fine sendoff to a legend of the US women's wrestling scene and I'll forever appreciate her contributions to the business.

Hardcore Justice's main event saw Team Dreamer and Violent By Design in a Hardcore War match. Dreamer was shown attacked, down, and injured in a pre-match, backstage angle aired beforehand. This was basically booked similar to a WarGames match, but without the two rings and a cage. The commentary crew didn't sell the gimmick super well, even admitting to being in the blind on the rules, which was sadly on par with IMPACT. They do so much right yet can't help but always have moments like that, reminding you that they aren't on par with the bigger contemporaries and never will truly be. But yea, Swann came off well enough considering the cluster nature, but perhaps not as much as expected considering the big Omega match that was coming up. EY stumped all heat Swann was building up and then when Trey Miguel came in for Dreamer, Trey came off as the true star of the entire match. I'd add that VBD is one of the more interesting units in wrestling right now and I'm actually more interested in seeing their direction going forward than I thought I'd be. Mileage will vary on the match itself, but it was pretty good overall in my opinion and just enough to be considered recommendation levels. An enjoyable wheel turner.

The key to a strong IMPACT is a strong, well-defined X-Division and some interesting matches and stories involving the Knockouts, Tag, and World Championships. While they still need to continue working on the first part, I'd argue they're doing decent overall with the brand and have been a pretty solid watch experience for years now.

Check the main event out here if nothing else and keep an eye out on Rebellion and the invasion aftermath that might follow...